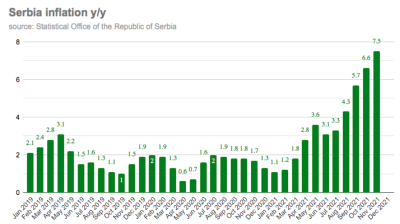 National Bank of Serbia (NBS) forecasts that Serbia’s inflation will peak at the end of this year and in early 2022.

Under the NBS projection, y/y inflation will most probably continue to move above the upper bound of the target tolerance band (3.0±1.5%) until mid-2022. It will peak around New Year and strike a steady downward path starting from Q2 next year to return within the target band around the middle of the next year.

Serbia’s inflation in November measured 0.9% month on month or 7.5% year on year, according to data from the Statistical Office of the Republic of Serbia. Three quarters of the November y/y inflation was a result of higher food and energy prices, categories beyond a significant impact of monetary policy, said the National Bank of Serbia (NBS) in a statement.

Y/y core inflation (CPI excluding the prices of food, energy, alcohol and cigarettes), which is affected by monetary policy measures, was much lower than headline inflation in November at 3.0%. This continued to suggest the transitory nature of inflationary pressures, the NBS said. Since early 2021, y/y core inflation has averaged around 2%.

Core inflation is low and stable owing to the exchange rate which has been relatively stable for years already and which is the anchor of price stability. Other important factors contributing to low and stable core inflation are the inflation expectations of the financial and corporate sectors, which have been within the target tolerance band for a longer period already.

The increase in headline y/y inflation from 6.6% in October continues to be led by food and energy prices. Unprocessed food prices gained 20.7% y/y in November, reflecting a 23.8% rise in fresh vegetable prices, a 22.6% rise in fresh meat prices and a 18.0% rise in fresh fruit prices.

Amid a further increase in global food prices, the drought in Serbia and elevated production costs, processed food prices picked up 7.1% y/y in November. The period ahead is likely to see abated inflationary pressures in relation to food prices, supported, among other things, by government measures to cap the prices of staples.

In the same period, energy prices climbed 13.6%, driven chiefly by the local petroleum product prices that soared by 25.1%, reflecting both the low base effect and rising global prices of crude oil.

On the other hand, the global oil price declined in late November and early December, which means that inflationary pressures on this account are likely to soften over the coming months, the NBS added.

Bearing in mind this year’s high base, there is a chance that headline inflation will settle in the lower part of the target band in the second half of 2022. The risks to the projected inflation profile are associated mostly with primary agricultural commodity prices, global energy prices, the pace of global economic recovery and the persistence of disruptions to global supply chains. As regards domestic risks, inflation will depend most on the outcome of the next agricultural season, which is expected to return to average following this year's drought.