Naspers: a success story of one of the largest technology investors in Africa and the world 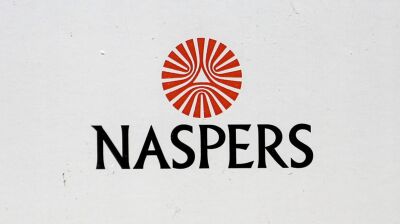 The technology industry in Africa is thriving despite economic and political challenges and the effects of the global pandemic. Between 2020 and 2021, the number of tech start-ups in Africa tripled to around 5,200 companies, according to management consultants McKinsey & Company.

Naspers (not to be confused with Napster, the music streaming app) is a multinational technology investor in Africa and one of the largest in the world. It is a leading example of a global consumer internet company “that empowers people and enriches communities,” according to its website.

“We look for opportunities to address big societal needs in markets where we see the greatest growth potential,” says the company.

Naspers is headquartered in Cape Town, South Africa, and has spread its roots through Southeast Asia, Latin America, Europe, and the United States, with market investments in Egypt and Bangladesh. It has been operating for more than a century, as it was founded in 1915.

It has interests in online retail, publishing and venture capital investment, and owns shares in companies like Prosus, Takealot.com and Media 24.

Prosus is a global consumer internet group. It is the largest in Europe and one of the largest technology investors in the world, operating across different platforms and geographies. It is majority owned by Naspers, its parent company, with 56.92%.

Takealot.com is South Africa’s largest e-commerce retailer. It was launched in June 2011, aiming to be Africa’s most customer-centric shopping destination. It has over 21 departments across electronics, lifestyle, media and gaming, and fashion. Naspers increased its investment in Takealot to 96% in 2018.

Media24 is Africa’s leading media group, with a sizeable presence in digital and traditional publishing, distribution and financial data.

On June 27, the global company reported strong revenue growth with profitability in core operations for the year ending March 2022. The group’s e-commerce portfolio delivered revenue growth of 49% to $10.7bn.

“Throughout our 100-year history, we have grown by investing in, acquiring and building leading companies with sustainable competitive advantages,” announces the company.

Despite its significant performance across the portfolio, Naspers said that it had faced macroeconomic and geopolitical challenges, which had resulted in volatile capital markets in the last part of the financial year.

Like any other company, Naspers has been impacted by the war in Ukraine due to higher inflation and rising interest rates, which increased the cost of capital and reduced the risk appetite level.

Therefore, the company is prioritising supporting its existing businesses. It invested $6.2bn to increase its stakes in existing investments and in new assets where a substantial opportunity for future value creation is seen.

“In FY22, we delivered strong growth and scale across our businesses, positioning them for continued growth. We invested in our segments and strategic M&A over the year, reflecting our belief in the potential of the businesses we are building,” said BOB van Dijk, Group CEO, Prosus and Naspers.

In 2001, Naspers purchased a stake in Tencent, a Chinese technology company, which created immense value for South African investors, as has the decision to retain the investment for more than 20 years. The Tencent investment dominated the company’s other activities: roughly 80% of its investment portfolio is for Tencent.

Naspers’ share price was down 51% from its peak in early 2021, as represented by the Capped SWIX, over five years. 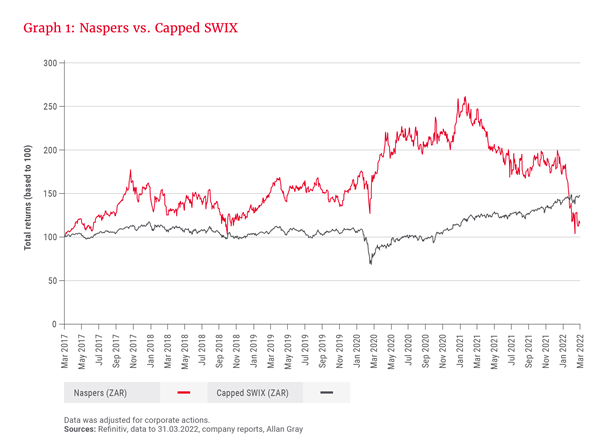 To understand the Naspers business, Tim Acker, an equity analyst at Allan Gray, suggests that we consider three parts of the business:

Tencent went through a period of slow growth because of regulatory changes in China, a slowing Chinese economy, US rules that may prohibit Chinese companies from listing in the US, and a threat to impose sanctions against the ownership of Chinese assets. All these factors decreased the value of Tencent.

All these regulations are not necessarily negative in the long term, according to Acker, as some of them are catching up to similar trends in Europe and the US. However, some regulations are intended to transfer value from platform internet companies like Tencent to consumers and small businesses.

Tencent is still well positioned in China and is less at risk than other Chinese tech companies. It has important growth potential. It creates value for consumers, advertisers and SMEs, and successfully manages regulatory issues.

The collection of other businesses

Naspers invested in online food delivery companies such as Delivery Hero and iFood, which are rapidly growing. It also invested in payments company PayU and online retailers eMAG and Takealot.

Many of these businesses are still at an early stage, which increases the risk of facing some challenges along the way. In addition, market valuations of early-stage technology businesses have declined significantly over the last year, which consequently lowers the value at which Naspers may sell investments.

“There are also some positive consequences to lower valuations, such as allowing Naspers to invest new money at lower prices and potentially thinning out the field of competitors for some of its businesses, as capital will be harder to raise,” Acker said.

Holding companies may trade at discounts to their underlying assets. Discounts of 20% to 30% are common, but large discounts usually indicate a problem, such as poor capital allocation, mismanagement, and high running costs. The Naspers holding company discount has been increasing, especially after the Prosus structure was introduced in 2019 and when the share exchange and cross-holding were introduced in 2021.

The current discount is at 64%, and Naspers trades are at less than half the value of its underlying investments. The company has been undergoing an increasing holding company discount, which caused the Naspers share price to underperform Tencent.

The future of Naspers

Naspers has the potential to unlock significant value in several ways despite the massive discount. Allan Gray predicts that any asset Naspers can distribute creates an approximately 3x uplift in value, going from 64% discount to no discount on distribution to shareholders.

Naspers was also scrutinised for not pursuing a simple structure and gaining value from it rather than making new investments. Some ways that simplify the structure include “selling or partially unbundling Tencent, separately listing all other businesses, or selling off assets individually,” according to Allan Gray.

The company’s share price decline can be explained by the management’s actions, such as not unlocking more value from asset sales and overcomplicating the structure. It also emanates from external factors including a loss of value of Naspers’ Russian assets, a general reduction in valuations of tech companies, and a turn in sentiment to Chinese assets.

However, it is still unclear what the future holds for Naspers as it may be permanently affected by some of these factors, while some may be temporary, which will create more opportunities for long-term investors.

Ghana used to be on the list of the world’s least developed countries. No more. Today the republic is one of the fastest-growing economies in West Africa. Though poor, more children have been going ... more

Global media giant Naspers has reported a strong financial performance, seeing its first half profit jump by 11%, driven by a large contribution from Chinese internet ... more