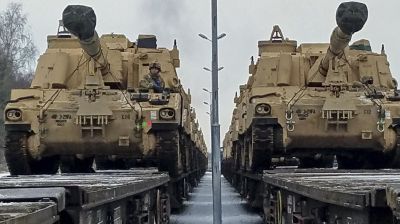 US Paladin self-propelled howitzers shipped from Germany sit on flatbed vehicles after crews offloaded them in Drawsko Pomorskie, Poland on January 9, 2017. / Photo by US Department of Defense/Corinna Baltos
By bne IntelliNews January 12, 2017

Russia sees a threat in a major deployment of US troops and tanks that started in Poland in recent days at the orders of the outgoing US administration, Kremlin spokesman Dmitry Peskov said on January 12.

“We interpret this as a threat to us and as actions that endanger our interests and our security,” TASS quoted Peskov as saying. “Especially as it concerns a third party building up its military presence near our borders. It’s not even a European state.”

In the biggest US deployment in Europe since the end of the Cold War, about 1,000 of some 4,000 troops planned have so far arrived in Poland under a deal reached at last summer’s Nato summit to reassure East European states anxious about Russia. Cold War-style tensions have escalated in the region since Moscow's annexation of Crimea in 2014 and subsequent support for separatists fighting in East Ukraine.

As well as troops, more than 80 main battle tanks and scores of other armoured vehicles were sent to Germany for transit by rail and road to Poland and nearby countries. The US Armoured Brigade will also carry out military exercises in the Baltic republics. The plan is to rotate the forces every nine months.

However, the election of Donald Trump as US president is casting doubt on the longer-term deployment of the US forces, given his incoming administration’s signals that it will seek to mend ties with Russia. Trump deepened the concerns in East Europe by saying earlier that he would not necessarily stand by Nato commitments to defend all members of the alliance.

At a press conference on January 11 Trump then tempered expectations of improved relations with Russia and its president by saying this was not a given. “I don’t know that I’m going to get along with Vladimir Putin," he said nine days before he takes office. "I hope I do, but there’s a good chance that I won’t.”

The US military deployment was supposed to happen later in the month but was then brought forward in a possible bid by the outgoing administration of Barack Obama to lock the president-elect into the strategy.