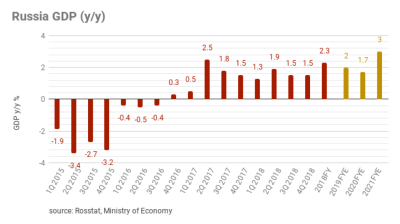 Rosstat upgraded Russia's GDP growth in 2018 to 2.3% on the back of unexpectedly vibrant growth in the construction sector
By Ben Aris in Berlin February 4, 2019

More questions were raised over the veracity of the Russian State Statistical Service’s (Rosstat's) results after it upgraded its estimates of growth in the construction sector that led to a revision of 2018 growth from 1.6% to 2.3% — the best result in six years, the service said on February 4.

The changes were part of the detailed reporting on the make-up of growth in the previous year that Rosstat releases every year in January and are supposed to reflect the most accurate estimates. The agency always releases preliminary results around the end of the year but they are usually revised after the full breakdown for all sectors of the economy are calculated. However, this year’s revisions to the construction sector – one of the three key drivers of the economy – were unusually large.

Russia is emerging from a “silent crisis” that was caused by the collapse of oil prices at the end of 2014, and the 2.3% growth figure would be the best result the economy has put in since 2012, the same year as the petro-driven economic growth model was exhausted and saw growth sink to zero in 2013, even before the clash with the west started and the first sanctions were imposed in 2014.

However, analysts queried the results as the accuracy of Rosstat’s results have been questioned recently. The head of Rosstat was fired at the end of last year and the agency was taken under the direct control of the Ministry of the Economy, which produces its own economic forecasts.

At issue is the upgrade in construction activity. Rosstat revised its data on construction growth from 0.5% for the first eleven months of 2018 to 5.3% for the entire year,

Economic Development Minister Maxim Oreshkin said during the Davos international economic forum that he estimated GDP growth in 2018 at 2%; the revision for the construction sector bumps growth in 2018 up a little more to 2.3%.

After the release of construction data earlier in January other economic observers also upgraded their economic growth estimates: the Institute for Research and Expertise of Vnesheconombank (VEB) also estimated GDP growth at 2%, while analysts at VTB Capital put the number at 2.2%. The Central Bank of Russia (CBR) predicted growth of 1.5-2% in 2018.

However, as bne IntelliNews reported earlier, the revision in the construction activity doesn't tally with other proxies in the construction sector. VTBC analysts looked at physical proxies like cement production and transport and didn't find a corresponding uptick that would have been expected if the whole sector were growing strongly.

Some confusion remains over the result. Rosstat says the value added in construction in 2018 increased by 4.7% compared to the previous year, but that would not necessarily coincide with the dynamics of the volume of work in construction, such as cement production, reports Vedomosti.

Rosstat also revised up activity in other sectors. In addition to construction, value added in mining and in the public administration, military security and social security rose strongly by 3.8% and 3.5% compared to 2017, respectively. Value added in wholesale and retail trade increased by 2.2%, in financial and insurance activities by 6.3%.

Analysts are also dubious about the strong industrial results which don't seem to tally with the IHS Markit manufacturing PMI index, which slowed to 50.9 in December, just above the no-change 50 mark and down from 51.7 in December.

Corporate profits were strong in the last quarter of last year, putting in their best results in three years. Russia’s banks have also returned to profit, earning RUB1.3bn in 2018 (and RUB1.9bn if the distressed banks taken over by the CBR are counted out of the results). But none of this good news is feeding through to street level: real incomes were down again slightly in 2018 for the fifth year on the trot.

The 2.3% result also bucks the structural limits economists have placed on the economy of 1.5-2% growth for at least the next two years unless deep structural reforms are made. The Ministry of Economics itself previously estimated that growth of more than 2% was not possible until 2021 at the earliest when it says growth will rise to 3% as the first beneficial effects of President Vladimir Putin’s May Decrees start to kick in.

Of the structural reforms that have been made recently, raising the retirement age goes into effect this year and will add only 0.1pp to growth this year and then 0.2-0.3pp in 2020-2021. But the government has done little else to improve the production capacity of the economy. Even the CRB says the earliest that any of the May Decrees can affect growth will only be from three years time.

The International Financial Institutions have also left their outlooks unchanged. In 2018-2020 GDP will grow by an average of 1.5-1.8%, according to the World Bank. Russia will lag behind the developing countries in terms of growth rates, even thought the global growth rates are expected to slow this year to around 2.6%.

Russia’s CBR reserves down $43.7bn since the start of the war
14 hours ago
Industrial inflation exceeds 25% y/y in Moldova
16 hours ago
Romania’s construction companies post robust 6.5% growth in Q1
16 hours ago
Russians trade TV news for social media as war-weariness sets in
1 day ago
Net FDI in Bulgaria jumps four times y/y through March to €1.05bn
2 days ago