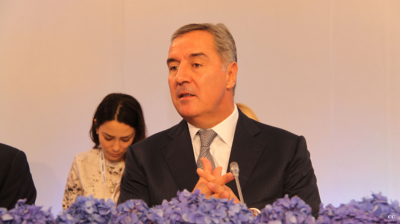 Montenegro’s President Milo Djukanovic has said that Serbia and Russia are using the Serbian Orthodox Church to undermine his country’s pro-Western government amid protests against a controversial church law.

Thousands marched peacefully in Podgorica on February 29, demanding cancellation of the law, which was adopted at the end of December and has provoked unrest since then. According to its critics, the law may strip the Serbian Orthodox Church of hundreds of religious sites in Montenegro, including medieval monasteries and churches.

“If you are asking whether this is a continuity of the [attempted] destruction of Montenegro and obstruction of its intention to continue its path to ... European and Euro-Atlantic integrations, there’s no doubt in that,” Djukanovic told Reuters in an interview.

This is not the first time Djukanovic has accused Russia of interfering with Montenegrin politics. In 2017, he said that a coup attempt in the Adriatic country that was revealed ahead of the previous year’s general election was part of Russia’s attempt to destroy the European Union.

That statement came after in October 2016, on the night ahead of Montenegro’s general election, Montenegrin police arrested 20 Serbian paramilitaries suspected of planning to disrupt the election. Most of them agreed to testify in exchange for shorter jail sentences. Montenegrin prosecutors later said that several Russians linked to the security services in Moscow were involved in the plot.

The protesters that marched on February 29 were led by Metropolitan Amfilohije of Montenegro and Onufriy, the head of the Ukrainian Orthodox Church that is loyal to the Patriarchate in Moscow.  The protesters carried Serbian flags and church banners.

A separate Montenegrin Orthodox Church was set up in 1993 but has not been recognised by other Orthodox Christian communities to date. The local branch of the Serbian Orthodox Church controls most holy sites, some of which are popular among tourists and bring significant revenue.

Both, Moscow and Belgrade have denied Djukanovic’s accusations.