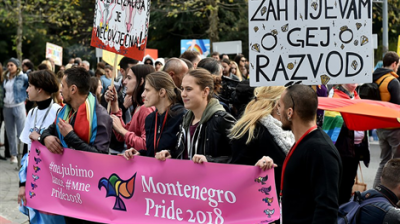 The move was rather unexpected as surveys have shown in the past years that more than 90% of Montenegrins are not comfortable about gay and lesbian couples and are rather homophobic.

The law gives same-sex couples the same rights as heterosexual ones but does not give them the right to adopt children or get married.

However, it is a big step in a region where most gay couples have no legal rights at all.

“This is a great step in the right direction for Montenegrin society, its democratic maturity and integration processes. Equality and same rights for all are the cornerstone of human and European values. I want to thank the LGBTIQ community for dialogue and contribution. There can be no room for discrimination based on sexual orientation in a European Montenegro,” he said in a statement.

Montenegrin LGBTI organisations also hailed the move, saying they were very happy about this positive outcome that has been awaited for many years.

“The feeling that as of today the love and partnership of all us in the LGBTI community are admitted and recognised in the face of law cannot be described. I cannot say that as of today we are completely equal … but this is a great step ahead in the recognition that we, the same-sex couples, exist,” John M. Bara of the LGBTIQ Social Centre NGO said in a statement.

The Mariupol siege is over as the last Azov defenders surrender
7 minutes ago
Kyrgyzstan: Eccentric health minister fights for his job amid claims of corruption and bullying
14 hours ago
Azov commanders have remained behind in the Mariupol steelworks to continue the fight
15 hours ago
Russia hopes Chinese carmakers will help revive Moskvitch brand
15 hours ago
Russia may leave the WTO and WHO. In practice, it never really joined
16 hours ago