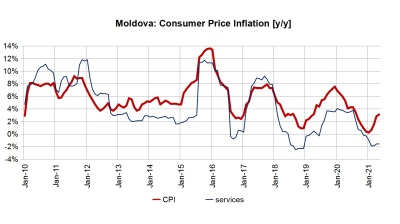 Average consumer prices increased by 3.1% y/y in May, accelerating from the 2.8% y/y rise in April, Moldova’s statistics office announced on May 10.

The headline inflation is already above the refinancing rate, maintained by the central bank a couple of days earlier at 2.65%. The monetary authority has scheduled the next board meeting for the end of July. On the other hand, significant inflationary pressures are expected from regulated price adjustment only after the July general election — when a much hawkish policy might be necessary.

The prices of food and non-food goods are rising well faster than the headline inflation, which is toned down by the administered electricity and natural gas prices.

The average price of services, which include these two elements (electricity and gas), decreased by 1.5% y/y as of May. The price of electricity was 15% smaller in May compared to one year earlier, whole the price of natural gas was 12% smaller. The prices of fuels, part of the non-food goods category, increased by 17% y/y and the Competition Council’s analysis failed to confirm that this was an effect of some collusion among companies.

Although President Maia Sandu has spoken out against the monopolistic approach in the economy (speaking of the car fuels market), the government may have to revise prices upward after the July 11 election.