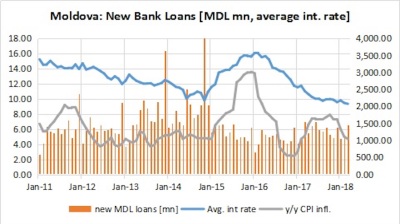 The stock of bank loans extended by Moldovan banks contracted by 5.4% y/y to MDL32.35bn (€1.59bn) at the end of March, according to central bank data. Expressed in euros, the contraction was 2.4% y/y.

The contraction was attributed to a combination of the unresolved ownership situation at Moldova’s two largest banks, and high interest rates.

The two largest banks are still seeking majority owners, and therefore they are avoiding developing massive expansion strategies, and the third largest bank (Victoria Bank) only recently came under the control of Romania’s Banca Transilvania, and promises to take a more aggressive stance.

Notably, the best performing bank (Mobiasbanca, controlled by Societe Generale) is also for sale and discussions with Hungary’s OTP and a US investment fund are reportedly under way. Under these circumstances, it is still premature to predict a quick increase in the financial intermediation with a notable impact on growth, despite expectations that the central bank will resume the interest rate cut cycle. The monetary policy rate is currently at 6.5%, versus 4.7% y/y inflation at the end of March.

The contraction in lending also occurred as interest rates remained high, particularly in real terms. The average interest rate for new loans extended in local currency dropped by 1.68pp y/y to 9.35% in March 2018. This is a rather high cost of loans compared to the around 3.5% y/y inflation envisaged for the end of the year (to accelerate by 1pp during 2019).

The central bank had already cut the projection for average inflation in 2018 from 4.0% y/y to 3.7% y/y, expecting the prices to accelerate to 4.7% y/y in 2019, according to the February Inflation Outlook made public by the monetary authority. A natural gas price revision dragged down the prices by 0.4%-0.5% effective January. Moldova’s central bank targets 5% inflation.

In contrast, the credit extended to traders, the largest segment of the bank credit market, narrowed by 8.3% y/y to MDL9.2bn. The bank loans in the sectors of food and agriculture also decreased, by 8.0% y/y to MDL3.09bn, and 5.7% y/y to MDL2.46bn, respectively.

The stock of loans extended to “productive sectors” (manufacturing, other than food) contacted as well by 16.3% y/y to MDL2.08bn. This comes against the robust industrial development, driven, however, by foreign investors that do not use local financing since they are local subsidiaries of European groups. The local entrepreneurs are therefore the most hit by the scarce financial intermediation.