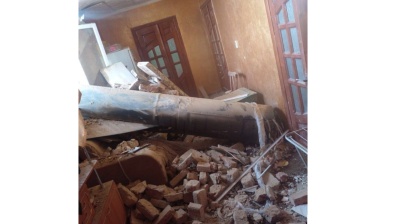 An unexploded missile crashes into an apartment in the Ivano-Frankivsk region in western Ukraine on December 29. / bne IntelliNews
By Dominic Culverwell in London December 30, 2022

The largest volley of Russian missile and drone attacks yet to hit Ukraine struck cities across the country on December 29 interrupting Ukraine’s festive celebrations as Russia attempted to plunge the country into darkness ahead of the New Year holiday.

As citizens prepared for what is the biggest holiday of the year in Easter Europe, Russia launched 69 missiles at Ukraine’s energy infrastructure in the eighth mass attack since the barrage began on October 10. Air defence managed to down 54 of the missiles, including all 16 projectiles fired at Kyiv, the Kyiv Independent reported.

Nevertheless, Kyiv Mayor Vitali Klitschko reported that at least three people were injured, including a 14-year-old girl, after falling debris hit civilian buildings. In Kharkiv, two people were killed in the attacks and the total number of injured across the country reached seven.

The governors of eight regions recorded Russian attacks, with Lviv and Odesa also suffering from heavy strikes. According to Ukrainian energy minister Herman Halushchenko, the energy situation is particularly precarious in Western Ukraine, Odesa Oblast and Kyiv Oblast, with emergency power outages implemented across the country.

In Kyiv, 40% of residents are suffering blackouts, whilst Lviv Mayor Andriy Sadovy reported that a staggering 90% of the city was without electricity as of 10am. Meanwhile, power company DTEK noted that blackouts were ongoing in the Odesa and Dnipropetrovsk regions after energy facilities were hit in Odesa.

Belarus state-media reported that a missile landed in the neighbouring country. According to BelTA, a “Ukrainian S-300 missile” was found in Belarus, with an investigation currently underway. According to the Kyiv Independent, Minsk believes that the missile could have missed its target, like with the Polish incident last month, or that Belarusian air-defence shot it down. Kyiv has not responded to the incident.

Russia has deliberately targeted Ukraine’s energy infrastructure for over two months, attempting to beat Ukrainians into submission. The attacks are in direct violation of the Geneva Convention with Ukrainian Foreign Minister Dmytro Kuleba labelling them “senseless barbarism”.

“There can be no ‘neutrality’ in the face of such mass war crimes. Pretending to be ‘neutral’ equals taking Russia’s side,” Kuelba tweeted.

The strikes follow a proposed peace plan from Ukrainian President Volodymyr Zelenskiy. Moscow made it clear that it will not entertain Zelenskiy’s deal if it does not take into account Russia’s annexation claims over four Ukrainian territories. The volley of missiles was seen as a direct dismissal of the plan.

“Russia does not want peace with Ukraine. Russia wants the subjugation of Ukraine,” British Ambassador to Ukraine Melinda Simmons tweeted.

Russia is likely to pursue further attacks in the new year; however, the recent bolstering of air defence systems to Ukraine, including Patriots, seems to be having a profound effect on limiting damage compared to earlier attacks in October and November. Zelenskiy applauded air defence in the previous attack on December 14 for successfully defending the country.

Kyiv pleaded for Patriot air-defence systems for months, which Washington DC eventually agreed to send earlier in December. The systems are effective at targeting ICBMs and short-range missiles; however, they struggle to hit the Iranian-made Shahed kamikaze drones and experts warn that they may not be a game-changer.

The former commander of the US Army Europe, Ben Hodges, told Politico that the US should send Ukraine MGM-140 Army Tactical Missile System (ATACMS) surface-to-surface missiles, which have a range of 300km. However, Washington is reluctant to send the missiles out of fear it may escalate the conflict.

With the war bleeding into 2023, Zelenskiy took to Telegram to encourage Ukrainians to stay strong and remain resilient on December 28. Reflecting on Ukraine’s bloody year, he told citizens to support each other and maintained his optimism that Ukraine will be victorious.

“We have not lost our humanity – even though we have gone through terrible months. And we will not lose it – even though there is also a difficult year ahead. We will reach victory. And we have to do it really together,” the President wrote.

"Take care of Ukraine, appreciate each other and do everything to help our warriors! Every day – until victory," he added.