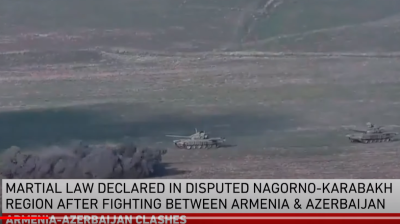 Fighting erupted between Armenia and Azerbaijan early on September 27 around the ethnic Armenian enclave of Nagorno-Karabakh within Azerbaijan. The Armenian defence ministry said two Azerbaijani helicopters were shot down and that Armenian forces hit three Azerbaijani tanks and at least three drones. Azerbaijan denied the claim.


Azerbaijan’s army said it had taken control of six villages in Nagorno-Karabakh as of the afternoon of September 27, a claim that Armenia rejected. "Fierce battles" were taking place all along the frontline, said Azerbaijani officials.

Spokeswoman for the Armenian defence ministry, Shushan Stepanyan, said the fighting began with an Azerbaijani attack. But Azerbaijan claimed it was the Armenian side that attacked and that Azerbaijan launched a counteroffensive. It said it was responding to shelling along the whole front.

Observers will now anxiously watch the responses of strategic partner to Armenia, Russia, and Turkey, a close ally of Azerbaijan—Ankara was bellicose in verbal attacks on Armenia and beefed up its contribution to annual military exercises held with Azerbaijani in the wake of July border skirmishes between the two foes that were the worst seen for four years.
Turkish president Recep Tayyip Erdogan said in a statement posted on Twitter that Armenia had “once again showed that it is the biggest threat to peace and tranquility in the region”. He added that Turkey stood by Azerbaijan “with all its means, as always”.

The Organisation for Security and Co-operation in Europe (OSCE) has long been trying to mediate a settlement of the conflict, with diplomats from France, Russia and the US - making up the OSCE Minsk Group - trying to build on a ceasefire, but this mission has largely failed.

Russia's foreign ministry also called for an immediate ceasefire and talks to stabilise the situation. 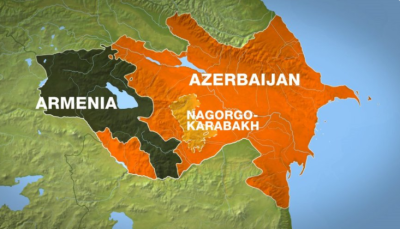 Azerbaijani President Ilham Aliyev said in a TV address that Armenia's policy was "a new war for new territories", adding: "Armenia has been consciously provoking Azerbaijan, and they will see the bitter results of this. Armenia is an occupying country, and an end must be put to this occupation and an end will be put to it."

Aliyev also said that “there are losses among the Azerbaijani forces and the civilian population as a result of the Armenian bombardment”.

The assistant to the president of Azberbaijan and of foreign policy Hikmet Hajiyev, released a statement laying the blame for the attacks at the feet of Armenia. “We strongly condemn Armenia's new act of aggression against Azerbaijan,” he said.

Armenian Prime Minister Nikol Pashinian said Azerbaijan had launched an air and artillery attack on civilian settlements in Nagorno-Karabakh. The breakaway region is populated mostly by ethnic Armenians. "Get ready to defend our sacred homeland," Pashinian added in a statement.

"Our response will be proportionate, and the military-political leadership of Azerbaijan bears full responsibility for the situation," the Armenian Defence Ministry said in a statement. There were reports of claims that Azerbaijani attacks included an assault on Nagorno-Karabakh capital Stepanakert, which would be a particularly worrying development if confirmed.

The extent of casualties in the fighting was unclear but both sides have reported civilian casualties. Human right activists in Armenia said two civilians – a woman and a child – had been killed by Azerbaijani shelling. Officials in Baku stated that an unspecified number of their civilians had been killed and six wounded. Nagorno-Karabakh announced 10 of its military staff had been killed. None of the reports could not be independently confirmed.

Turkey’s ruling AKP party spokesman Omer Celik added to Ankara's reaction, tweeting: “We vehemently condemn Armenia’s attack on Azerbaijan. Armenia has once against committed a provocation, ignoring law.” He pledged that Turkey would stand by Azerbaijan and said: “Armenia is playing with fire and endangering regional peace.”

Analysis of ongoing and unverified social media reports and posts on the clashes points to Azerbaijani and Armenian armed forces massing along the Line of Contact between the two countries in Nagorno-Karabakh near the towns of Fizuli and Terter near the Iranian border. The July fighting was some way from Nagorno-Karabakh nearer Georgia. It saw several soldiers and citizens on either side killed or injured. Again, both sides accused each other of starting the fighting and analysts were unable to conclusively determine which side triggered it.

Videos released by both sides on the latest fighting showed tanks rolling through towns heading towards the disputed border, while Armenian posts included footage of a tank on fire rolling down a hill.

A video released by the Armenian ministry of defence showed footage of the alleged destruction of Azeri tanks by Armenian forces.

Iranian reports said Azerbaijan had an Mi-8 transport helicopter shot down with missiles. A video purportedly showed the helicopter crashing over a built-up area with smoke billowing across a town.

Hopes rose of progress in settling Armenia and Azerbaijan's differences rose last year after face to face meetings between Pashinian and Aliyev but nothing came of the encounters with both national leaders accusing the other of obstinacy.

A widening of the conflict would raise concerns about westward flows of piped oil and gas from Azerbaijan via Georgia. Azerbaijan is hoping to later this year start exports of Caspian Sea gas to Europe using new Southern Gas Corridor (SCG) infrastructure that runs further from Georgia and across Turkey, Greece, Albania and the Adriatic seabed to southern Italy.