MACRO ADVISOR: In Eurasia, devaluation is first line of defence

Russia is not the only economy suffering from the combination of the oil price collapse and sanctions; most of the countries in the Commonwealth of Independent States (CIS) are also feeling the pain. For some it is because they have also waited far too long to start diversifying away from oil and gas dependency, while some others never properly cut the economic umbilical cord from Mother Russia after the Soviet Union ended. It means that all are now experiencing lower growth rates for their economies and all have, or are expected to, devalue their currencies in order to remain competitive against cheap imports from Russia and from other CIS states that have already devalued their currencies.

In some instances the weakening economy has led to nervousness in government, and many are using both devaluation and a tightening of political control in order to head off the threat of a public backlash. It seems that the memory of the Tulip, Rose and Orange revolutions keeps many of the region’s elites awake at night.

The countries of the CIS, excluding Ukraine but including Turkmenistan for this exercise, can be split into two main categories; those which have significant revenues from hydrocarbons and which have not reformed their economies in any material way since independence; and those which are resource poor, but are very dependent on trade or subsidies from Moscow or remittances from workers in Russia. Most are now suffering because of either the lower oil price or the recession in Russia, and all are feeling painful contagion from the ruble collapse.

Worst hit are those economies that depend on remittances from their nationals working in Russia. Those workers are now more vulnerable to losing their jobs, especially as many are employed in the construction sector, which has been particularly hard hit across Russia. But even those that have secure employment have seen a big drop in their take-home pay when translated into their home currency. Many of those workers have simply decided that it is no longer worth their while to be in Russia and are either heading home or to other countries, especially China, in search of better paid jobs.

The impact of this is felt both in the Russian economy as well as in their home countries. Workers from Tajikistan and Kyrgyzstan, the two countries with the greatest exposure to remittances from Russia, fill many jobs in, for example, the retail and services sectors. As they leave, those sectors are suffering because it is not easy to either find Russians willing to take those jobs or other immigrant workers willing to take the devalued ruble salary. The problem in their home countries is not just the loss of remittance income, but also the fact that hundreds of thousands of workers are, or may soon, return home and that has considerable risk for incumbent governments in terms of social instability and political backlash if the returning workers cannot find alternative employment at home or in another country relatively quickly. Devaluing their respective currencies is also an effort to minimise the gap between the ruble wages and the translated value back home in the hope that this keeps many workers in Russia rather than on the bus to an uncertain future back home.

But even countries that have very little vulnerability to worker remittances from Russia, such as Armenia and Belarus, are still very much impacted by the ruble collapse. As the ruble fell, Russian goods became much cheaper for consumers in the CIS countries with, as the table below shows, the three countries that have joined Russia as members of the Eurasian Union, most exposed. The volume of Russian goods flowing into these countries in the fourth quarter of last year is reported to have increased significantly – for example, Kazakhs bought over 50,000 cars in Russia during November and December alone – while exports to Russia have become less competitive. Both factors are contributing to the slowdown now evident in these economies.

The response from all of the countries has been to devalue their currencies in an effort to offset the loss of competitiveness. Kazakhstan has not yet taken this step, but is widely expected to do so very quickly after the April 26 presidential election. That election has been called almost 18 months early because, it is widely assumed, of the government’s concern that the slowdown in the economy and the expected devaluation could lead to further instances of social unrest this year.

Even the states that have relatively little exposure to the Russian economy, such as Uzbekistan and Turkmenistan, have been caught up in the regional turmoil and forced to devalue their currencies in order to try and head off a steeper decline. 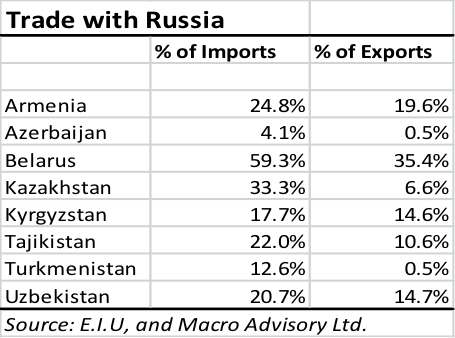 Apart from devaluation, what can government’s across the region do to finally start weaning their economies off Russia and/or hydrocarbons? The available evidence so far is “very little”. Several states, most notably Kazakhstan and Azerbaijan, have rolled out a number of development plans in recent years with the aim of creating a more diverse economy, but little progress has actually been delivered. In reality both countries appear to be waiting for the big boost to hydrocarbon revenues from projects near completion; the Kashagan oil deposit in the case of the former and phase 2 of the Shah-Deniz gas field in the latter. Turkmenistan is in a similar position as it plans to more than double gas exports to China by the end of the decade.

The Eurasian Economic Union could deliver some of the promise of regional economic expansion for the member states, and those expected to join, but the birth if the EEU has, so far, only served to raise concerns about the dominance of the Russian economy and the difficulties for other member states when the ruble collapses. This is looking like a slow delivery project at best.

China investment also has some major flashing question marks over it. While the initial expectation was for a flood of Chinese investment helping to boost and broaden economies across the region, the reality has been more selective. China is indeed investing in the region, but the money is mainly for projects in energy or other materials sectors where the product is then shipped eastwards to help secure the Chinese economy. Money is also going into infrastructure projects that will help boost Chine exports to Europe and the Gulf. There is very little investment beyond those categories. China is also limiting the flow of workers from the mostly Muslim Central Asian states especially into its already restive western provinces. It prefers to resettle Han Chinese from elsewhere in the country into these provinces.

It appears that whether by choice, or a lack of choice, the countries in the Russia/energy space are building their monetary defences in an effort to limit the contagion from the ruble collapse and also limit the flow of returning workers. In short, riding out the storm and hoping for an oil price recovery.