Losses to the Belarus economy already $500mn, protests cut Minsk off from capital markets with $3bn to finance this year 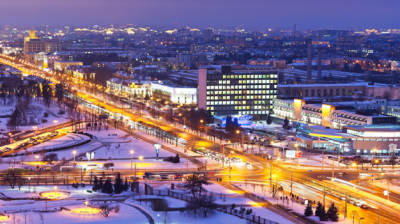 Minks needs to repay c$3bn of debt this year but only has $8bn in reserves, or 2.5 months of import cover. Already in debt to Russia for $8bn, Belarus is now almost completely reliant on Moscow for funding. / wiki
By Ben Aris in Berlin August 21, 2020

The nationwide protests and general strike have already cost the struggling Belarusian economy $500mn and could plunge the country into a major economic crisis, say experts. The protests have in effect cut Minsk off from the international capital markets and it will have to come up with $3bn from somewhere to finance its international obligations this year.

The bill from the economic dislocation caused by popular uprisings is always steep. Ukraine’s Euromaidan revolution in 2014 caused an economic collapse that saw the economy shrink by 17% in the first quarter of 2015 and Belarus is looking at similar pain unless a peaceful resolution can be found soon.

Just turning off the internet at the start of the protests following the rigged August 9 election cost the country over $50mn a day, say industry participants. The general strikes are significantly more expensive.

"Losses from protests are not those 500,000 Belarusian rubles that were spent on restoring flower beds and lawns. The current damage has already amounted to at least $500mn. The delayed [damage] is estimated in billions. The foundations of the foreign lending system created over the years have been violated, the country's investment attractiveness has suffered, sanctions are being discussed," Belarusian presidential aide Valery Belsky said in an interview with the official BelTA news agency.

Belsky added that the contraction of the Belarusian economy could amount to 25% if the country were to withdraw from its Union State deal with Russia, signed by Belarus' self-appointed President Alexander Lukashenko in 1999 that creates a sort of Eurozone with its eastern neighbour.

“The predictable outcome is the loss of positions on the Russian market and the immediate transition to global oil and gas prices. Considering that co-operation with Russia forms over 50% of GDP, approximately half of this amount should be immediately written off from our balance sheet," Belsky said, clearly exaggerating the risks, but highlighting the very real danger of the loss of business if relations with Russia sour as a result of the political crisis.

Bankers concur that the showdown is going to cost the country dearly, but probably not lead to as much as a 25% contraction in GDP.

“The political situation in Belarus will likely bring headwinds to the $60bn economy. The ongoing strikes at the country’s largest factories, which generated more than $10bn in revenues, $7bn in export proceeds and 12% of total budget revenues in 2019, on our estimates, could affect economic growth, the budget and external stability. Belarusian authorities already estimate the loss from the ongoing unrest at $500mn, which could lead to the outlook for the country’s GDP – which the IMF and rating agencies already see as contracting 5-6% y/y this year – being cut by another 1pp or even more,” Artem Zaigrin, chief economist at Sova Capital brokerage headquartered in London, told bne IntelliNews.

Belarus’ economic growth has already slowed to 1.6% in the first half of this year and the country will almost certainly go into recession in the second half, although the economy was expected to bounce back to 2.2% growth next year.

And Russia’s role will be key for the country’s prospects. The opposition are well aware of this and have been very clear that they intend to continue close co-operation with Russia in a post-Lukashenko government.

“The crucial aspect of Belarus’ economic outlook is the direction of trade,” Zaigrin said. “According to Belstat, Russia accounted for more than 40% of the country’s $32bn exports in 2019. Belarus’ exports to Russia are heavily geared towards agriculture (>30%), vehicles, chemicals, machinery and equipment.”

Changes in how the two countries co-operate in the aftermath of the political turmoil could also affect Belarus’ funding. As Belarus has no IMF deal, nor does it co-operate with any of the other international financial institutions (IFIs) in any meaningful way, it is almost entirely dependent on Russia and the international capital markets for sovereign funding.

The Russian government and the Russia-led Eurasian Fund for Stabilisation and Development (EFSD) are the main sources of sovereign credit for Minsk and they will be needed this year to finance Belarus’ debt obligations.

According to Belarus’ finance ministry, the public sector is due to repay $2.5bn-3bn of external debt every year for the next five years, while the outstanding debt to Russia stands at $8bn.

“Continued and uninterrupted access to international debt markets is critical for Belarus given that the country only has $8bn of reserves, or 2.5 months of imports. The inability to meet external obligations would not be resolved without a significant adjustment in the exchange rate,” says Zaigrin.

The protests have already effectively cut Belarus off from tapping the international market for more funds until the current political crisis is resolved. Sova Capital is recommending clients to avoid the sovereign Eurobonds until there is more clarity, and the prices of the bonds have fallen, although not dramatically so far. But that means Minsk will be almost entirely dependent on Moscow to fund the $3bn of debt repayments this year.