Latvian GDP growth slows down to 2% y/y in Q2 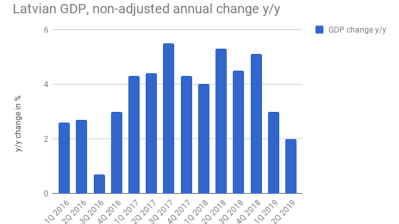 The CSB thus revised the 2.1% y/y unadjusted growth figure published in a flash estimate in late July. The reading also marks a slowdown versus unadjusted growth of 3% y/y seen in the first quarter and is in line with forecasts of deceleration in 2019, as investment growth is set to weaken and trade conditions – especially with the EU – are deteriorating.

Investment growth slowed down to just 4.3% y/y, compared to 8% y/y in January-March. Household consumption expanded 3.5% on the year, 0.5pp faster than in the first quarter.

Exports of goods and services contributed moderately with a 1.9% annual rise in the second quarter.

Sector-wise, growth was broad with most sectors registering growth except the “other industry” and finance and insurance categories. Elsewhere, there was a 12.8% y/y growth in agriculture, forestry, and fishing. Growth in manufacturing was just 0.4% y/y. Construction growth also weakened to 1% y/y.

“Rapid expansion phase in construction is over while global headwinds are hurting exports and manufacturing,” SEB predicted in its latest outlook on Latvia.

In quarterly terms, GDP expanded an adjusted 0.7%, reversing from a decline of 0.1% q/q the preceding quarter. The CSB did not publish seasonally adjusted data for annual growth in the second quarter.

The Latvian economy is forecast to grow 3.1% in 2019, according to the latest projection from the European Commission although that seems likely to undergo a downward revision in October. Swedbank puts it at 2.8% based on the weaker than expected first half of the year. SEB’s forecast is just 2.4%.