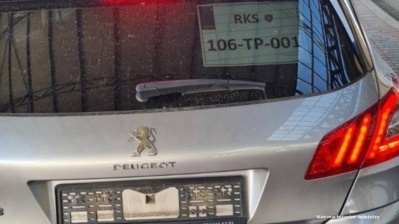 Kosovo’s PM Albin Kurti said on October 28 the decision on the replacement of Serbian license plates with the RKS code remains in force, but its full application will start on April 21, 2023.

The Kosovan authorities started issuing new car number plates for local Serbs on September 1, replacing the KS with the RKS code as part of reciprocity measures which sparked anger on the Serbian side. The US and EU officials repeatedly asked Kosovo to postpone the deadline by ten months in order to avoid tensions in northern Kosovo.

So far, there has been no interest among Serbs in Kosovo to re-register their vehicle and according to Interior Minister Xhelal Svecla only 20 cars belonging to Serbs from the north of Kosovo were re-registered with RKS plates.

Pristina planned to implement the decision on the license plates on August 1, but at the request of the international community, it postponed the implementation until October 31.

Kurti said that authorities will send warnings to Serbs in northern Kosovo who did not re-register their vehicles with RKS plates from November 1 to 21.

According to the government statement, from November 21 until January 21, 2023, owners of cars that have not been re-registered will be fined and from January 21, 2023 until April 21, 2023, test plates will be placed on vehicles with KS plates.

After April 21, 2023, cars that have not been re-registered will not be able to enter or circulate in Kosovo’s territory.

On October 28, the US urged the government of Kosovo to extend the implementation period for the new license plate regime saying it is of interest of making progress on the EU-facilitated dialogue to normalise Kosovo-Serbia relations.

“The United States is disappointed and concerned that the government of Kosovo has rejected requests to do so from its international partners.  Kosovo and Serbia should urgently and flexibly work to reach a comprehensive agreement on normalised relations, centred on mutual recognition,” State Department said.

The statement added that it is important that Pristina and Belgrade reduce inflammatory rhetoric and undertake concrete actions to demonstrate their commitment to constructive collaboration.

A few days earlier, Kurti said that the deadline for replacing Serbian car number plates with local codes, which expires at the end of the month, would not be postponed.

Belgrade and Pristina blame each other for explosions in northern Kosovo