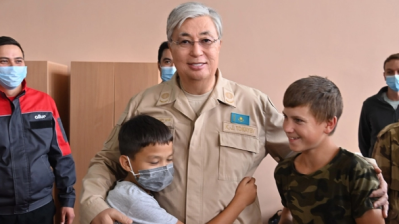 Man of the people. / Akorda
By Zholdas Oristbayev for Eurasianet November 4, 2022

On the same day that Kazakhstan completed the registration process for the six people running for president in this month’s snap election, swarms of volunteers in blue jackets fanned out into the capital, Astana, distributing leaflets.

The face on the flyers was that of the incumbent and certain winner, 69-year-old Kassym-Jomart Tokayev.

Tokayev is a president in need of a boost to his popular legitimacy. One method devised to convey the impression that the push for his re-election on November 20 is the fruit of an organic grassroots movement has been the creation of something billing itself as the “People’s Coalition.”

It is that coalition, not “administrative resources,” the term used to describe the bureaucratic support that leaders in the region traditionally rely upon to hold onto power, that is going to ensure Tokayev’s electoral success. At least that is what Nurzhan Jetpisbayev, a representative of the ruling Amanat party’s youth branch, known as Jastar Rukhy, told Eurasianet while handing out leaflets in Astana.

Despite having surfaced so rapidly, essentially in response to a snap election announcement on September 1 that came largely out of the blue, the coalition already has a substantial operation.

"We have 6,815 people in 226 coalition offices around Kazakhstan. And 99 percent of them are paid volunteers,” Jetpisbayev said. “Some of them are full-time students, but we make sure that their participation in the coalition campaign won't have an impact on their academic progress.”

Many harbour strong suspicions, however, that the coalition is not quite as organic as its backers claim.

In mid-October, a video showing students crowding the Almaty premises of Jastar Rukhy went viral on social media. The young person who disseminated the video claimed in it that he and others were being offered a month’s work, but without being told any specifics, in return for 70,000 tenge ($150). Later, people who turned up at the Jastar Rukhy office were required to sign a written pledge describing them as Tokayev canvassers.

Some analysts, like Shalqar Nurseit, the head of the Policy Solutions Center, an Almaty-based think tank, argue Tokayev gave himself a leg-up by starting his campaign in stealth mode weeks before even declaring a vote was due to take place.

On September 5, the president travelled up to the Kostanai region, which had around that time been badly hit by forest fires. Tokayev has travelled extensively across the country since then, and his every step has been glowingly covered by state media outlets and pro-government bloggers. The image on-message media have sought to project is of a hands-on and engaged leader – very much in contrast with former president Nursultan Nazarbayev, who rarely, particularly toward the end of his three decades in power, took the trouble to visit members of the public afflicted by any form of misfortune.

People well-positioned to know the details of such things have told Eurasianet that state-owned and state-sponsored media outlets have been flooded with pro-Tokayev material.

“We have no authority to refuse to publish,” an editor at a state-sponsored outlet, who requested anonymity, told Eurasianet.

Many media organisations in Kazakhstan receive direct funding from the government through a contentious initiative known as the “state order.” Officials cast this as a measure designed to render media financially viable, but critics say it merely encourages slavish adherence to the government line.

“When it comes to texts promoting Tokayev, all they require of me is assistance checking the copy, not actual journalistic writing,” said the editor. “So I have become a copy editor instead of a managing editor.”

Undesirable coverage, meanwhile, is quashed. After a Swiss-based website, Public Eye, published a report in September alleging that Tokayev’s family had enriched itself by means of improper ownership of oil and metals assets, access to the site was blocked inside Kazakhstan.

The president’s office has not addressed those allegations directly, but Tokayev appeared to be alluding to them when he spoke during a September 30 speech in the city of Semey about “external forces intending to sow confusion in our country.”

“Unfortunately, there are many people abroad who envy our achievements. They are even mounting informational attacks against our country,” he said.

Radio Azattyq, the Kazakh service of RFE/RL, has also become difficult to access at times. Kasym Amanzhol, the chief at Azattyq’s Almaty office, told Eurasianet that his team have been unable to demonstrate that website access issues had been caused by government action. But he said that problems began to be noted following their pick-up of the Public Eye piece.

Political observers argue that the apparent astroturfing initiative behind the Tokayev campaign is required to put distance between the incumbent and his predecessor, Nazarbayev. Tokayev was anointed to his presidential role by Nazarbayev in 2019, when the latter stepped down, while still retaining strong behind-the-scenes power.

Since the start of this year, however, Nazarbayev’s once-hallowed status, which had been energetically nurtured by the state-directed propaganda machine, has been on a ruinously downward trajectory. Protests in the first few days of January over fuel prices quickly spiralled into a generalised show of nationwide rage that was directed in large part at the legacy of corruption and nepotism overseen by Nazarbayev.

Tokayev and his backers scrambled after that to disassociate as much as feasible from the former president. Re-election with a sweeping mandate is seen as the final seal to enshrining Tokayev’s claim to being his own man.

“Tokayev's campaign office may genuinely be trying to convey to the public that he has a sizable electorate behind him and that he cares about the population by using the term ‘People's Coalition’,” said Serik Beisembayev, the director of the Astana-based public policy research center PaperLab.

The irony in this, though, is that ersatz popularity-manufacturing tricks are straight out of an old and familiar playbook, said Beisembayev.

“The exact same method was employed by Nazarbayev’s campaign managers,” he said. “Tokayev is currently moving along his path.”

PM’s attempt to quell Mongolia’s ‘coal mafia’ protests drowned out by livid crowds
5 hours ago
Italian PM Meloni outlines new ambitious plan for Africa
7 hours ago
Is Russia putting additional pressure on Belarus to join the war?
18 hours ago
Can Russia sneak gas into the EU via a Turkish gas hub?
1 day ago
Roddy Scott Foundation providing education to the children of war-torn Pankisi Gorge
1 day ago