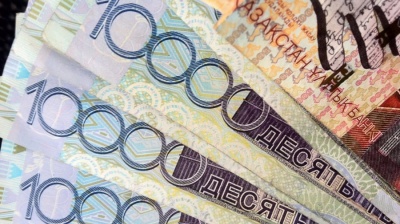 Russia sanctions fallout has placed the tenge under heavy pressure.
By Kanat Shaku in Almaty March 1, 2022

The National Bank of Kazakhstan together with the Kazakhstan Stock Exchange decided to delay Kazakh tenge (KZT)/dollar (USD) currency trading until 15:00 local time on February 28 amid impacts of the collapsing Russian ruble on the Kazakh currency.

A statement issued by the Kazakhstan Stock Exchange read: "On February 28, trading will open at 15:00 Frankfurt auction, Nur-Sultan time."

The measures were temporary and reflected a “high level of uncertainty” and the need to minimise the pressure exerted by external geopolitical factors in the form of the Ukraine crisis and sanctions on Kazakhstan’s foreign exchange market and financial stability.

The tenge had fallen by approximately 16.2% against the dollar since the beginning of the year as of the end of February 28 due to the collapse of the ruble, which the tenge often tracks. The dollar exchange rate stood at KZT489.3 by the end of the day, according to the central bank.

Kazakh media also reported on February 28 that currency exchange offices had temporarily halted dollar sales, while some Kazakh banks were not allowing people to place money in their dollar deposits.

Moreover, some Kazakh banks were only allowing withdrawals from dollar deposits via conversions to tenge.

By the end of February 28, some exchange offices were selling the dollar at 500 tenge.

In neighbouring remittance-dependent Kyrgyzstan, the Kyrgyzstani som (KGS) moves in sync with the Russian ruble and as such has seen a similar level of collapse.

Kyrgyz President Sadyr Japarov in a statement suggested citizens could buy gold with their som, saying: “The value of any currency is always decreasing. The value of our gold keeps rising. So those of our citizens who have money can buy gold from the National Bank in any amount, in bars weighing anywhere from 1 gram to 13 kilograms.”

Tajikistan, another remittance-dependent Central Asian nation, saw the Tajikistani somoni (TJS) lose 35% of its value against the ruble in the wake of Russia officially recognising the self-proclaimed republics of Donbas and Lugansk last week.