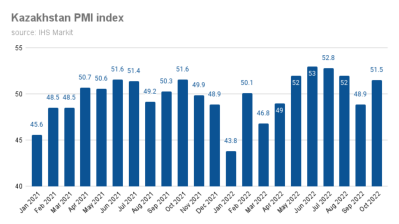 Kazakhstan's manufacturing sector showed signs of stabilisation in October following the renewed contraction seen in September after four months of expansion that ran from May, according to the latest purchasing managers' index (PMI) survey data from Tengri Partners and IHS Markit.

The index posted 51.5 in October, following September's 48.9. Anything above 50.0 signals an improvement.

The PMI survey noted that firms expanded their purchasing activity and employment levels in October amid efforts to increase production. At the same time, output fell for the second month running as difficulties with sourcing materials continued. Suppliers' delivery times lengthened to the greatest extent since the opening wave of the COVID-19 pandemic in 2020, the survey said.

Anuar Ushbayev, managing partner and chief investment officer at Tengri Partners, said: "There were some signs of recovery in the latest Kazakhstan manufacturing PMI data, with new orders broadly stable during October. Firms continued to be hindered by disruption to logistics caused by the sanctions placed on Russia, however, with supply-chain delays the most pronounced since the opening wave of the pandemic.’’

"Encouragingly, firms showed a willingness to invest in efforts to boost production, with both employment and purchasing activity expanding. Manufacturers will be hoping that these efforts bear fruit and drive a renewed increase in output before the end of the year," he added.

Activity in the month was marked by a stabilisation of new orders following the deterioration recorded in September, while production was broadly unchanged.

Hungary’s GDP growth slows to 4.0% in Q3
18 hours ago
Poll shows only one in five Moldovans happy with their government
19 hours ago
Montenegro’s tourist arrivals almost double y/y in October
19 hours ago
LNG in Europe: ready or not?
19 hours ago
Russia’s GDP at 4.4% decline in October, construction and agro stick out
19 hours ago