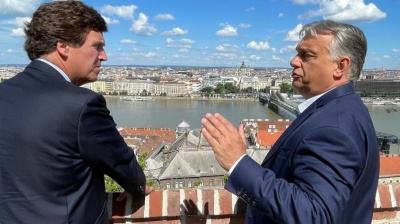 Prime Minister Viktor Orban (right) told Fox TV anchor Tucker Carlson (left) in August that he was "prepared" for outside "interference” from the United States in the 2022 election.
By bne IntelliNews November 25, 2021

US President Joe Biden has invited some 110 countries to a virtual summit on democracy from December 9-10, the US State Department announced on November 24, but Hungary is not among these countries. Viktor Orban is the only premier among the EU member states not taking part in the two-day event.

During the election campaign, Joe Biden promised to convene a summit of governments and civil societies who want to take action against the decline of democracy and human rights.

The Democracy Summit, which will be held by video conference, will focus on combating authoritarian regimes, fighting corruption and promoting human rights. China, Turkey and Russia are also missing from the list of participants. The majority of invitees, 77 countries, rank as "free" or fully democratic, according to Freedom House's 2021 report, while another 33 invitees rank as "partly free".

Hungary was ranked partly free in the Freedom House’s latest report. The country was among the top 10 registering the steepest decline of freedom in the last 10 years, falling 21 points.

The United States is inviting countries to the Democracy Summit that are setting the bar high for themselves and others in terms of renewing democratic values, policies and institutions, Under Secretary of State for Civilian Security, Democracy, and Human Rights in charge of organising the online meeting Uzra Zeya told leftist newspaper Nepszava in a telephone interview.

Joe Biden’s election victory a year ago was bad news for Viktor Orban, who was the first to come out in full support of Donald Trump in 2016 and last year he put his bet on the incumbent, saying he had no plan "B" should the Democratic candidate win.

During his election campaign last year, Biden cited Hungary in his criticism of his predecessor Donald Trump’s foreign policy.

"You see what’s happening from Belarus through Poland and Hungary and the rise of totalitarian regimes in the world," Biden said last year. "Our current president supports all the thugs in the world."

Orban said openly on numerous occasions that he is "prepared" for outside "interference” including from the United States in the 2022 election, which promises to be a tight contest that could see the radical rightwing premier’s defeat.

"That will happen, we are not worried about it, we are prepared for it," Orban said in an interview with Fox TV anchor Tucker Carlson, when asked if he was worried about "international interference" in the election.

Carlson was one of the honoured guests of a three-day conference of conservative and rightwing intellectuals gathering in Hungary in August organised by Matthias Corvinus Collegium (MCC), an extremely well-funded educational institution seen as a breeding ground for future Fidesz-friendly elites.