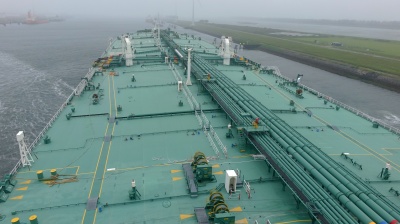 Not many VLCCs will be docking in Iran in coming months unless the US grants extensions to sanctions waivers.
By bne IntelliNews March 15, 2019

Japanese very large crude carrier (VLCC) Kisogawa has started loading crude oil at Iran’s Kharg Island for what S&P Platts reported on March 14 will apparently be the final shipment of Iranian oil to Japan before its six-month sanctions waiver from the US expires.

Whether the 311,000-dead weight tonnage (dwt) tanker will be back for more Iranian oil in the foreseeable future may depend on whether Tokyo can negotiate an extension of the waiver from the Trump administration.

On March 13, there were reports that because of concern that an attempt to drive Iran’s oil exports to zero would presently—given the supply situation on world markets—push up oil prices to levels not acceptable to US officials, Donald Trump would likely tolerate the renewal of the waivers for most of the eight countries awarded the exemptions including the biggest buyers China and India and, apart from Japan, Taiwan, South Korea, Turkey, Greece and Italy.

The waiver extensions would be granted in exchange for pledges to cut combined imports of Iranian oil to below 1mn b/d, around 250,000 b/d below Iran’s current exports, the reports added.

Under the heavy sanctions regime introduced by the US against Iran last year, Trump is targeting an eventual halt to all Iranian oil exports to choke off Tehran’s main source of revenue and drive the Iranians to the table to renegotiate their Middle East activities and policies, including backing provided to various militant proxies across the region.

It is unclear whether the Trump administration will be able to convince China, India and Turkey—all of whom depend heavily on Iranian oil and have criticised the US sanctions on Iran—to reduce imports of Iranian oil.

“India, China and Turkey—the three tough cases—will continue to negotiate with the administration and are likely to keep their waivers,” another quoted source said.

Referring to the eight countries with waivers, a US State Department spokesperson told Platts on March 13: "Each of those jurisdictions have already demonstrated significant reductions of the purchase of Iranian crude over the past six months, and indeed two of those eight [Italy and Greece] have already completely ended imports of Iranian crude and will not resume as long as the sanctions regime remains in place."

Ex-Obama official talks of Iranian oil buyers that “don’t care about exemptions”
In early February, a former US State Department official who managed sanctions on Iran during Barack Obama’s administration, said Iran will be able to sell an average 800,000 to 1mn b/d of crude oil even if the US refuses to extend the waivers.

Amos Hochstein, now a senior vice president at US-based liquefied natural gas company Tellurian Inc, said Iran could slip some of its oil exports past US sanctions—introduced last November 5—to a few countries which will purchase the crude with or without waivers because they “don’t care about exemptions”. Hochstein did not specify the countries he had in mind.

Oil, gas and petrochemical exports are targeted by the energy sanctions.