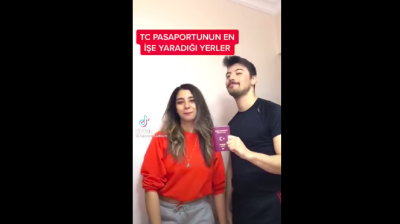 The pair who shot the video have received a travel ban. No joke.
By Akin Nazli May 4, 2021

Two Turkish young people, both 23, have been detained and accused of “openly insulting the Turkish state’s sovereign insignia” after posting a satirical TikTok video titled “How to make use of a Turkish passport”, Global Voices reported on May 1.

In their video, the pair try out the Turkish passport as an oven mitt, bookmark and drink mat.

After being detained, they defended their actions by saying that they were joking amid the coronavirus pandemic restrictions.

By now released on probation, they must sign in at a police station every day. A travel ban applies to the accused prior to their hearing.

Receiving a travel ban for voicing the uselessness of the Turkish passport can be seen for the irony it is, but the sentiment among young Turkish people is that they generally have no chance of travelling abroad not only because of the weak passport rating, but also because of the trashed Turkish lira, rife unemployment, the pandemic and the acutely inadequate coronavirus vaccination programme in the country.

Another common feeling among the young is that when you are in Turkey, there’s fun to be had—as long as you are not a citizen of it. Tourists in Turkey are not subject to any pandemic restrictions.

On May 1, a Turkish citizen who went for a swim with some Ukrainian tourists in the town of Datca on the Aegean coast was fined by police. A video shows police officers trying to explain why, but the man cannot fathom why he is the only person being fined out of five people who were swimming in the same place.