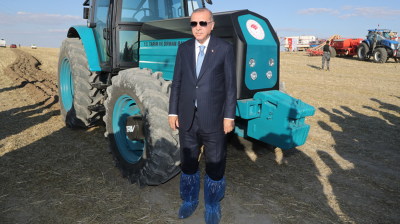 Turkey's ‘supreme leader’ Erdogan seen in his galoshes shepherding agricultural activities. However, there is some genuine concern that as agricultural strategies and events stand, the country could sooner or later find itself sliding towards famine.
By Akin Nazli in Belgrade March 31, 2020

Turkey’s food security is an unsettling issue that in the past few years has simmered away menacingly in the background, threatening to come to the boil.

Even before the coronavirus (COVID-19) pandemic started upending economies, it was raising clear concerns, particularly during the winter of 2018-2019 when the government resorted to raiding onion warehouses.

Observers, looking at latest pricing movements, are once more getting the jitters. As the virus outbreak started to take a hold beyond China, the average supermarket price of 500 grams of pasta jumped from Turkish lira (TRY) 1.75 (€0.24)—as recorded in the Turkish Statistical Institute’s (TUIK’s) official inflation basket of consumer goods in February—to TRY2.75 according to a study compiled by main opposition Republican People’s Party (CHP’s) deputy head Veli Agbaba, as quoted on March 25 by daily Cumhuriyet.

The kilogram price of bulgur (boiled and pounded wheat) expanded 10% to TRY5.5, while the price of potatoes leapt to TRY6 per kilogram at supermarkets in Ankara from TRY2 just a few weeks ago, Cumhuriyet added.

On the production side, the wholesale price of one kilogram of tomatoes has fallen to TRY1-1.5 from TRY3-4 two to three months ago due to a collapse in exports and domestic demand, Bulent Dolek, head of the fresh fruit and vegetable brokers association in the town of Erdemli on Turkey’s southern Mediterranean coast, told the daily on March 25.

BloombergHT, meanwhile, reported on March 27 that red and white meat prices at supermarkets were up more than 10% as of March 26 compared to March 7 prices, while lentil and flour prices had grown around 10%.

A longstanding concern in Turkey has been the price margins between food producers and consumers, a difficulty that has damaged both sides.

Two decades of harsh, neoliberal policies have pushed villagers to migrate to the cities, financially destroying small agricultural producers in the process. At the same time, the country has turned into a laboratory for genetically modified produce of global food corporations such as US-based Cargill.

The sale of domestic seeds in Turkey has been forbidden since 2006, when in its early days of power the regime of the ruling Justice and Development Party (AKP) essentially became a favourite Third World puppet of the neoliberal economic system.

Although AKP leader and Turkish President Recep Tayyip Erdogan, then PM, started biting the hands of those who fed him in front of the cameras starting from 2009, he has in fact in many ways remained the flag carrier for neoliberal policies of globalisation.

Turkey’s current agriculture minister Bekir Pakdemirli is a former employee of Canada-based McCain Foods. One of his finest achievements was zeroing the import tax on 200,000 tonnes of frozen potatoes.

The “winter, what winter?” season this year provided the Turkish government with the perfect opportunity to feign ignorance of the food sector dynamics at work as crop damage was at a minimum, giving a fortunate helping hand to supplies.

But with the pandemic now striking hard, the shifting tectonic plates of food nationalism and protectionism as well as inabilities to import required inputs for agricultural production are issues that will brook no more delay.

Some countries have added to their strategic food reserves while key wheat importers including Algeria and Turkey have issued new tenders, Bloomberg reported on March 24 in a story entitled “Countries are starting to hoard food, threatening global trade”.

Turkey annually produces 19-20mn tonnes of wheat. That only just about meets its own needs, and the country may need to limit its flour and pasta exports, Ali Ekber Yildirim wrote on March 31 in a column for business daily Dunya entitled “Agricultural export bans of the corona days”.

Turkey imported around 10mn tonnes of wheat in 2019, with around 80% sourced from Russia. On March 20, Moscow placed a 10-day ban on wheat exports.

Following Russia’s announcement, the price of wheat rose by $15-20 per tonne and Turkey received bids of 175,000 tonnes for a 200,000-tonne auction, Yildirim noted.

If required measures are not urgently taken, Turkey may face food scarcity within one to two months, Yildirim told DW Turkey on March 25.

Yildirim also expressed anxiety that while many vegetable crops should be sown during the present period, the Turkish government, famous for its timing, has in a COVID-19 response banned people older than 65 from leaving their homes. However, there are 2.1mn registered farmers in Turkey with an average age of 55—gendarmerie forces have been chasing old farmers, according to a Cumhuriyet report published on March 31.

“If the seedbeds are not prepared, the farmers cannot go to fields due to the pandemic and the seasonal workers cannot work, we could see empty shelves in three months. The result of this would be famine,” CHP deputy head Orhan Saribal told Cumhuriyet on March 29.

“In June and July, we may encounter a lack of production, and a food and agriculture crisis as a result of this,” he added.

The Food and Agriculture Association of the United Nations (FAO) has cautioned that there would be a risk of food insufficiency if a lack of coordination in policy plays out.