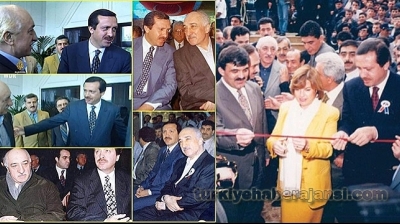 Erdogan's favourite song is "Beraber yürüdük biz bu yollarda/We've walked together on these roads". There was a time when he was only too willing to walk with Fethullah Gulen.
By Akin Nazli February 19, 2020

Newspaper columnists and officials in Turkey have this week addressed the possibility of a new coup attempt being mounted against President Recep Tayyip Erdogan. The controversy was triggered by a 276-page report from the California-headquartered US think tank RAND Corporation compiled for the US Army that started circulating in mid-January. RAND, which “started with one client—the U.S. Air Force” in 1948, entitled the analysis “Turkey's Nationalist Course”. Reading through it, the Turkey watcher gets the impression it was gathered through internet searches.

Although it gives the sense that RAND truly has no idea about Turkey, it includes two stark consecutive paragraphs: “Unusual political activity by the military leadership and a general decline in professionalism have alienated lower ranks of the TSK [Turkish Armed Forces]. Mid-level officers are reported to be extremely frustrated with the military leadership. Some observers believe that this discontent might even lead to another coup attempt at some point. Public trust in the military, previously seen as the guardian of order and the secular state, has eroded, but it has been restored somewhat following the success of the TSK’s operations in 2018 against Kurdish forces in Syria’s Afrin province.106

“Throughout this turmoil, Hulusi Akar has remained a key interlocutor for the U.S. and other foreign militaries. His retention of his position as TGS [Turkish General Staff] chief in 2017 and subsequent appointment as Minister of Defense in July 2018 in the first presidential decree under the new executive presidential system suggest that he will continue to be the leading figure in Turkish defense affairs for some time.107”

“106”, it turns out, refers to a news story about a public poll on trust in Turkish institutions. It definitely doesn’t link to anything about “extremely frustrated mid-level army officers” or “Some observers”. “107” takes you to an unremarkable Hurriyet Daily News report on the appointment of Akar’s successor. It presents no information on Akar’s future prospects.

You may say why are we are wasting your time with a bunch of lazy thinktankers earning a fat fee from American taxpayers but we’re talking about Turkey here, a Third World country (for so many) that has been subject to a whole series of military coups since it joined Nato in 1952.

“Guess before [the July attempted coup of] 2016, we had begun to dismiss the prior constant talk of some kind of coup in the offing as fantasy... then 2016 happened. But cannot see anyone trying this again for a very long time..,” Timothy Ash of Bluebay Asset Management said on February 17 in a note to investors.

Quite frankly, however, considering the type of plots that Turkey has already experienced multiple times in the past, why would anybody be surprised if an ally of Erdogan’s—Defence Minister Akar in this specific speculation from RAND—participated in a coup plot backed by US officials sat behind closed doors off corridors in the Pentagon?

Erdogan himself on February 15, aboard a plane taking him home from a visit to Pakistan, addressed the growing coup discussions.

A hack reportedly asked: “Are there some in Turkey who could after all be intending to carry out a coup?” Erdogan was cited as responding that he believed his nation “has the power, the potential, the faith to show the required response in maidans against those dabbling in coups”.

Touchingly, Erdogan apparently also complained to assembled press that he does not understand what they mean by a “controlled coup”.

Erdogan cannot read English—actually there is a question mark as to whether he reads anything much in any language—and it would seem remiss if his army of advisers did not help him satisfy his curiosity about this particular term.

As we all know, the events of July 2016 resulted in a “controlled coup”—Erdogan’s intelligence officers, his columnists, his media ‘hitmen’ and the Russians all warned Turkey’s leader about the upcoming bid to dislodge him and the strongman set out to use the coup attempt as a “controlled chaos” opportunity to entirely scrap the state of law in Turkey. A state of emergency was imposed for two years.

Sure, Mr. Executive President (the “Executive” bit was added after Erdogan orchestrated post-coup crackdowns and politics to end Turkey’s days as a parliamentary republic) was terribly surprised when he learned that the plotters were using Nato bases in Turkey on coup night—but he managed to strike some kind of deal and we still do not know what that deal was.

This is where things get tricky. With the putsch attempt defeated, the time was ripe for a “bogeyman” show. Erdogan set about detaining tens upon tens of thousands of largely ordinary people on the basis that the coup conspiracy was the work of self-exiled elderly preacher Fethullah Gulen and an insidious, omnipresent network they refer to as the Fethullahist Terrorist Organisation, or FETO. Anyone from any sphere of life, high or low—including Kurdish politicians, soldiers, officers, the judiciary, small-time lawyers, professors and high school teachers, business executives and shopkeepers, high-level police officers and police ‘bobbies’—with an alleged link to the Gulenists, past or present, is rounded up (several hundred more people were detained on this basis even this week).

But treating the Pennsylvania-based cleric as unpatriotic filth and blaming him and his so-called shadowy operatives for the effort to oust Erdogan has always sat very oddly with the fact that as our president rose to power, Gulen was an ally who even could be said to have served as a partner in power.

“Is it not the case that so many prime ministers, ministers and deputies used to journey to Pennsylvania to kiss Gulen’s hand and hold meetings with him? It is and it’s an absolutely undeniable fact. Is it not a reality that Gulen used to be treated with the highest esteem as ‘his Worship’, primarily by Erdogan and his AKP entourage? Is all this not documented in TV archive footage?” Mustafa Yalciner wrote on January 29 in his column for daily Evrensel.

Erdogan broke with Gulen yet his administration continues to claim the preacher still has immense political and terrorist wings with innumerable tentacles found in every corner of the land. Any average Turk going about their daily business might wonder “Where exactly is this political wing of Gulen?” and then worry that maybe, though they hadn’t realised it till now, they are part of it!

Erdogan, we may unhappily conclude, is desperately in need of a believable security threat to distract the Turks from their economic troubles. He and his cabal have driven the Turkish economy into the mire and seem on the point of doing so again in their haste to secure a quick recovery. Fool me once, shame on you, fool me twice, shame on me, the dear electorate may conclude if they are left with too much idle time on their hands. But where is Erdogan going to find a distraction big enough to serve his purposes? He can’t very well attack the Kurds in northeast Syria as they have wisely moved out of range, there are no Kurdish PKK militants left in Turkey and anti-terrorist operations in mountainous, northern Iraq just don’t get the public’s blood racing.

Libya is not igniting much interest among the Turks as it seems far, far away, and there are no Kurds there. And the Turks are also not interested in the Cyprus “illegal drilling” tripe.

The chances of a new wave of jihadist bomb attacks in Turkish cities is always a concern but it’s a stretch to imagine that any of the jihadists backed by Turkey in northwest Syria would ever turn to attacking Turkish civilians given the fall of Islamic State.

So let’s imagine for a minute what another coup attempt encouraged by some foolish soldiers and flagged by some US ‘blue blood’ thinktankers would mean for Erdogan. Well, it would certainly be a heck of a distraction and, provided it was successfully put down, it would give the top man in the Ankara palace more time to come up with new formulations for holding on to power. Who’s getting a sickly sense of déjà vu?

The best option for Turkey would be if someone could convince Erdogan that now is the right time to call snap elections. The time of ‘Erdoganomics’ will be at its end not long from now. The country’s endured 17 long years of the present regime and if there’s another economic crash, Erdogan’s got no chance at the polls. His chances of building a pure dictatorship, meanwhile, seem to have dribbled away. What about attempting a palatable retreat? It’s decision time.