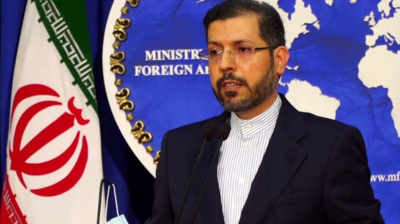 Iranian Foreign Ministry spokesman Saeed Khatibzadeh was on April 12 driving home Tehran's demand that the US lift all Trump era sanctions if it wants Iran to return to nuclear deal compliance.
By bne IntelIiNews April 12, 2021

Iran has vowed to avenge a suspected Israeli cyber-attack on its main nuclear facility that US intelligence sources have reportedly said may set back its nuclear development programme by nine months.

The sources told the New York Times that the April 10 attack caused an explosion and fire that wrecked the independently protected power supply to newly installed advanced centrifuges at the heavily-guarded Natanz plant that enrich uranium. They were quoted as adding that they believed Israel was responsible. Israel has not taken issue with the explanation for events and Israeli public radio cited domestic intelligence sources as saying a Mossad cyber operation was behind the blast.

For several months, the Israelis appear to have been stepping up their shadow war against Iran—last November, for instance, Israel appeared to be behind the assassination of Iran’s leading nuclear scientist, Mohsen Fakhrizadeh, who was shot dead on a rural highway—in a campaign to demonstrate their staunch opposition to US and European efforts to revive the 2015 nuclear deal under which the Iranians, in exchange for a shield against major sanctions, are permitted to continue with their nuclear programme provided they comply with conditions and inspections designed to ensure it stays purely civilian. Tel Aviv argues that the nuclear deal, also known as the JCPOA, is not tight enough to prevent an Iranian attempt at producing a nuclear weapon. Tehran claims it has never had any intention to develop such a bomb. Despite public utterances of defiance, even many of Iran’s hardliners—who may take control of the government in a presidential election due in June—might prefer to find a way to restart the JCPOA given that a continuation of US sanctions for much longer could produce further economic pain that would produce social tensions. Reviving Iran’s economy by building up trade and investment with Russia, China, India and Central Asia would take far longer than reactivating business with the West by restoring compliance with the nuclear deal.

The question now is whether Iran—which does not recognise Israel’s right to exist—will risk a big escalation of its ‘near war’ with Israel given that highly sensitive talks in Vienna, in which European diplomats are shuttling between Iranian and US delegations in an attempt at finding enough common ground to restart the JCPOA, have made some progress. Israel might like it to, given that such a move could hinder or derail the nuclear deal negotiations, but the pragmatic, moderate Iranian government, while striving not to lose any face, is thought by many observers to be keen to find a way back into the JCPOA as that would be the quickest way to emerge from the economic misery visited on Iran in the near three years since former US president Donald Trump pulled Washington out of the accord and imposed sanctions, of unprecedented weight, on Tehran. Iranian officials often talk of biding their time when it comes to revenge against Israel or the US.

There has been some annoyance in Europe at Iran stepping up its uranium enrichment to give it more leverage in the nuclear deal talks and no immediate comment came from France or Britain after the cyber-attack on Natanz in central Iran, but German foreign minister, Heiko Maas seemed to condemn the attack, saying: “What we are hearing currently out of Tehran is not a positive contribution, particularly the development in Natanz.”

Tehran described the attack as “terrorism” and Iran’s foreign minister, Mohammad Javad Zarif, said of Israel: “The Zionists want to take revenge because of our progress in the way to lift sanctions … they have publicly said that they will not allow this. But we will take our revenge from the Zionists. If they think our hand in the negotiations has been weakened, actually this cowardly act will strengthen our position in the talks.”

Following the attack, Israeli Prime Minister Benjamin Netanyahu, speaking at a meeting of security officials on the need to confront Iran and prevent it obtaining nuclear weapons, said: “Today’s conditions will not necessarily exist tomorrow.”

As things stand, the Vienna process risks getting bogged down in differences between Tehran and Washington over which sanctions the US should lift ahead of Iran returning to JCPOA compliance. The Iranians want all the sanctions that have asphyxiated its economy gone, pointing to as many as 1,600 different sanctions that they say are not permitted by the JCPOA. The US Biden administration has responded that some of these sanctions have no relation to the nuclear deal’s terms and conditons as they relate to terrorism, human rights, Iran’s ballistic missile programme and money laundering.

The attack came after Iran, on April 10, marked its National Nuclear Technology Day. During the day, President Hassan Rouhani inaugurated a cascade of 164 advanced IR-6 centrifuges at Natanz. He also launched tests on new IR-9 centrifuges, which officials said could enrich uranium 50 times faster than the IR-1.

Natanz was also the target of suspected Israeli sabotage last July when an above-ground centrifuge assembly plant was badly damaged by what Iranian officials said was a fire. In response, Iran began building a new structure underneath nearby mountains.

Enrichment at the plant was a decade ago disrupted by the Stuxnet computer virus, widely believed to have been created by the US and Israel. The virus changed the speeds at which the centrifuges spun, reportedly ruining almost 1,000 of them.

Recent months have seen Iran and Israel trade accusations over explosions that have damaged Israeli and Iranian commercial vessels. Limpet mines, which can be stuck to a vessel’s body, are thought to have been used.

Separately, the spokesman of Iran’s Atomic Energy Organization (AEOI) Behruz Kamalvandi was injured in an incident while inspecting the Natanz nuclear facility on April 11 after the attack. IRNA reported that Kamalvandi sustained head and ankle fractures after falling from a height of seven metres.