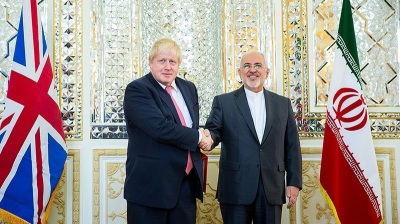 Boris Johnson meeting Mohammad Javad Zarif in Tehran in December 2017 when the former was serving as the UK foreign secretary.
By bne IntelliNews January 20, 2020

Iran will withdraw from the Treaty on the Non-Proliferation of Nuclear Weapons (NPT) if European nations attempt to refer the Islamic Republic to the UN Security Council over non-compliance with the 2015 nuclear deal, Iranian Foreign Minister Mohammad Javad Zarif was reported as saying on January 20 by Iranian parliamentary news service ICANA.

“The steps of reducing commitments [to the nuclear deal] are finished but if the Europeans continue their improper behaviour or send Iran’s file to the Security Council, we will withdraw from the NPT,” Zarif said. Iran was an early signatory of the 1970 NPT, designed to eventually lead to nuclear disarmament. Non-nuclear weapons states that are signatories, including Iran, agree not to pursue weapons and to only develop peaceful atomic technology.

Urged on by Arab allies in the Middle East such as Saudi Arabia, as well as Israel, the US has since Donald Trump took office as US president in January 2017 been turning the screw tighter and tighter on Tehran as it seeks to diminish its role in the region. On January 3, Trump even went ahead with what some experts say was act of war—and an illegal act of war in terms of international law contend many experts—by assassinating second most powerful Iranian official, Quds Force Major-General Qasem Soleimani with a drone missile strike at Baghdad airport. Days after, Iran said it would no longer respect any uranium enrichment limits in the nuclear accord (formally the Joint Comprehensive Plan of Action, or JCPOA), effectively leaving the deal on life support.

The only reason it is still seen as having some life left in it stems from Iran’s agreement to continue allowing UN inspectors from the International Atomic Energy Authority (IAEA) to visit to inspect is nuclear development programme, which Tehran insists remains a purely civilian endeavour.

Asserted they would still back JCPOA

After Trump unilaterally pulled the US out of the JCPOA in May 2018, the remaining signatories—Iran, the UK, France, Germany, Russia and China—asserted that they would continue to back the nuclear deal. But in return for compliance with measures barring its way to a nuclear bomb construction route—and that compliance was confirmed by the UN inspectors even as Trump walked out of the deal—Iran expected that the lifting of UN sanctions would enable its economic growth to accelerate. That has plainly not happened given that the US has unilaterally introduced crushing sanctions unprecedented in their weight and reach. The World Bank said two weeks ago that Iran saw its GDP shrink 8.7% in 2019 and can expect zero growth, or perhaps worse, in 2020.

Was Europe supposed to prevent this wretched economic situation? Well, after Trump junked the US commitment to the JCPOA, London, Paris and Berlin said they would offer Tehran trade assistance in the face of the US sanctions. An angry Tehran says nothing of consequence has been forthcoming. And now the UK, under the new government of Boris Johnson—who knows he must stay on the right side of Trump if he wants a trade deal with the US to help counter the negative impacts of Brexit—has started talking about the merits of replacing the nuclear deal with a “Trump deal”.

At the end of last week, it became clear that Trump threatened to impose a 25% tariff on cars to push the three European signatories to the accord to formally initiate proceedings against Iran for violating it. “This expression or threat, as you will, does exist,” German defence minister, Annegret Kramp-Karrenbauer, said at a January 16 press conference in London.

However, European diplomats gave background briefings to the media claiming that even before Trump’s threat, the European signatories had decided they would move forward with the formal complaint. French officials, meanwhile, have let it be known that they are concerned that with the current non-compliance, Tehran could have the ability to make a nuclear weapon in around a year’s time. Iran insists it has never had any ambition to build a nuclear bomb.

Remarking on Trump’s threat, and his perception of Europe’s response to it, foreign minister Javad Zarif—who on January 20 confirmed he has cancelled plans to attend this year’s World Economic Forum in Davos, while Trump is reportedly set to attend—tweeted: “Appeasement confirmed. E3 sold out remnants of #JCPOA to avoid new Trump tariffs. It won’t work my friends. You only whet his appetite. Remember your high school bully?”

The previous day, Iranian President Hassan Rouhani poured scorn on the proposal from Johnson that a “Trump deal” should replace the nuclear deal. He said it was a “strange” offer, noting that Trump has gained a reputation for always breaking his promises. There are fears in Tehran that Johnson will be nothing more than a lapdog to Trump as he pushes for a trade deal with Washington.

Rouhani said last week that all of Iran’s JCPOA non-compliance steps could still be reversed as soon as Europe was able to commit to the nuclear agreement and take concrete steps allowing Iran to sell oil. The US since May last year has been attempting to drive all Iranian crude off world markets.