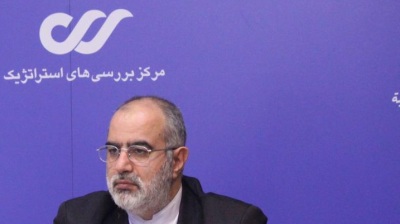 “Trump has transformed the definition of the West” says Hesamoddin Ashna. / Pirhayati.
By bne IntelliNews July 20, 2018

Rogue US President Donald Trump has created “something called ‘the West minus Trump’” which Iran must exploit in attempting to improve relations with Western nations, an advisor to Iran’s President Hassan Rouhani said on July 18.

Head of the Iranian Center for Strategic Studies Hesamoddin Ashna cited Trump’s bellicose attitude towards traditional allies of Washington and his friendly approach towards Russia in describing the emergence of a widening gap between the US and its allies that Iran could take advantage of to ease the escalating pressure being brought about by the economic aggression directed at the Islamic Republic by the Trump administration. Such opinions may explain why Tehran is showing true patience in sticking with Europe’s attempts to salvage the nuclear deal abandoned by Trump, despite the lack of progress.

“[Iran’s adversaries] thought the Helsinki meeting [between Trump and Russian President Vladimir Putin] would be a sad day for Iran, but now former US officials and some senators and European figures say it was a sad day for America!” Ashna wrote in a post on his Twitter account.

“Trump has transformed the definition of the West… The Helsinki [meeting] showed that now the West means the coalition between Europe and the [anti-Trump] Americans against Trump’s America,” he added.

On the eve of his summit with Putin, Trump described the EU as a “foe” because of its trade policies.

Referring to Putin, Trump said he was a “good competitor”, adding that “I think the word competitor is a compliment”.

“This is a chance for improving relations with the West. Now we have something called ‘the West minus Trump’,” Ashna said, adding that the new definition of the West groups Europe, Canada and half of the US population.

“It’s time for us to enter into talks with the anti-Trump America and the West minus Trump,” he concluded.

The clock is ticking on Iran’s bid to persuade the remaining major power signatories of the nuclear deal—the UK, France, Germany, Russia and China—and other countries including India to take measures that will guarantee it enough economic awards to make persisting with the accord worthwhile.

Whether Putin will in any way turn away from Moscow’s friendly relations with Tehran in the wake of his closed-door discussions with Trump remains to be seen.

The Trump administration intends to spend the rest of this year cranking up heavy sanctions against Iran to the point where the Iranians may have no option but to seek a renegotiation of the nuclear deal—or perhaps to the point where economic havoc prompts a serious attempt at regime change in the country of 80mn. Washington last week refused Europe waivers for those sanctions, targeted at both Iranian entities and any foreign banks or companies that remain in business with Iran.

The Trump administration is taking such a tough line that it is even aiming to shut down markets for almost all of Iran’s crude oil exports—indispensable to the country’s economic health—as soon as this November.