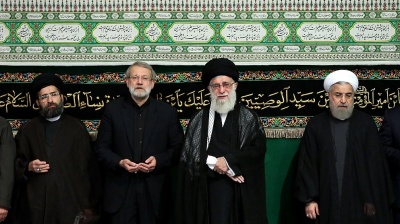 Islamic Republic establishment figure Ali Larijani has broken with the uncompromising line shown by the regime towards the month-long protests that have swept Iran by warning that a “rigid response” to the unrest “is not the cure”.

Larijani, 65, an adviser to Iranian Supreme Leader Ali Khamenei, and who served as speaker of parliament for 12 years until 2020, gave a lengthy interview to Iranian daily Ettela'at, addressing the protests, amid which at least 201 people are now thought to have died.

The conservative and former Islamic Revolutionary Guard Corps (IRGC) commander—who was barred from running for the presidency in 2021, helping to clear the way for Khamenei’s hardline favourite Ebrahim Raisi to win the restricted election—addressed the issue of enforcing the wearing of the hijab, or headscarf, by women in Iran. It was the death in custody of 22-year-old Iranian Kurdish woman Mahsa Amini—who was confronted on a Tehran street by morality police for allegedly wearing her hijab loosely—that triggered the initial protests.

Larijani questioned excessive state enforcement of the hijab under the Islamic dress code, warning that extremist enforcement of social customs leads to extremist reactions. “The hijab has a cultural solution, it does not need decrees and referendums. I appreciate the services of the police force and Basij [paramilitary volunteer militia under the IRGC], but this burden of encouraging the hijab should not be assigned to them,” he said.

“Do not doubt that when a cultural phenomenon becomes widespread, a rigid response to it is not the cure. The people and young people who come to the street are our own children. In a family, if a child commits a crime, then they try to guide him to the right path, the society needs more tolerance”.

Larijani also referred to how during the period of the last Shah’s monarchic rule prior to the 1979 Islamic Revolution, the hijab was not encouraged, but many women wore it voluntarily.

“Islamic government means that people manage their own affairs. It is the same in terms of social justice. If the affairs are managed by the people, their talents will flourish,” continued Larijani.

“The problem is that if in a society, young people do not implement one of the sharia rulings correctly from an intellectual and social point of view, this is not 100% wrong.”

The protests in Iran are seen as remarkable in that they are typically led by women.

Demonstrations on October 12 included a protest led by the Tehran bar association that was broken up by security forces.

Social media posts, meanwhile, told of the Union Council of Iranian Students quoting witnesses who said that security forces forced their way into the Hafez dormitories of Tehran University.

There were unverified claims from one witness that "the security forces initially broke the windows of the first floor and the entrance of the Hafez dormitories and entered some rooms and checked the student cards of the students… which was followed by some resistance from the students."

Earlier in the day, outside the Tehran University Art Building, there were claims of students fighting with Basij militia who were attempting to enter the complex.

RFE/RL reported officials as confirming that several high school students arrested during the protests have been sent to re-education camps.

Scores of indictments have been served across the country against people for involvement in “riots”.

Further posts on social networks indicated that the day saw anti-regime protests in cities including Sari, Golshahr, Shahin Shahr and many others.

Khamenei publicly mentioned the protests for a second time, appearing to describe them as incidents of a minor nature.

They were a "passive and clumsy design of the enemy against the progress and innovative movements" of the Iranian nation, he said.

Iranian officials have accused foes including the US, Israel and Saudi Arabia of fomenting much of the unrest.

Khamenei’s sister speaks out against her brother’s ‘despotic caliphate’
Turkmenistan: A shining city in a book of records
Anti-regime protesters in Iran call for three-day economic strike