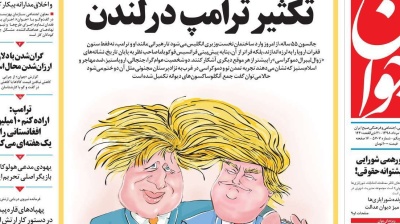 Iran's Javan newspaper reported "Trump duplicated in London" as both reformist and conservative press in the Islamic Republic expressed apprehension about the appointment of Boris Johnson as UK PM.
By bne IntelliNews July 24, 2019

Iran has indicated it wants to swap the two captured tankers at the centre of the British-Iranian crisis.

Iran’s president, Hassan Rouhani, told a weekly cabinet meeting on July 24: “We do not seek the  continuation of tension with some European countries. If Britain steps away from the wrong actions in Gibraltar [in which Royal Marines seized Iranian tanker Grace 1 on July 4], they will receive an appropriate response from Iran.”

Meanwhile, Iraq’s prime minister, Adil Abdul-Mahdi, revealed that his visit to Tehran earlier this week was partly at the request of then UK defence secretary Penny Mordaunt (who was replaced in the Boris Johnson cabinet formed on July 24) who requested that he attempt to negotiate the release of the captured British-flagged oil tanker Stena Impero, seized by Iranian forces in the Strait of Hormuz on July 19.

Iraq is a strong opponent of the sanctions the US has imposed against Iran to try and force changes in its nuclear and ballistic missile programmes and a withdrawal of support given to various militias in Middle East conflict zones. Iran contends that the UK seized the Grace 1 at the behest of the US.

Britain has previously offered to return the Grace 1 to Iranian hands as long as Iran gives guarantees that it will not continue with what it says was a plan to unload Iranian crude oil at the Syrian port of Baniyas, which would breach the EU’s embargo on such deliveries to war-torn Syria.

Operation Sentinel
New US defence secretary, Mark Esper, said on July 24 that Washington was also seeking to defuse the stand-off in the Gulf. He also said that European plans to coordinate naval escorts for oil tankers transiting the Strait of Hormuz would be “complementary” to a US proposal for escorts, dubbed Operational Sentinel. “The Brits are escorting their ships, and we will escort our ships to the degree the risk demands it and I assume other countries will escort their ships,” he said.

Escorts could on occasion be provided from the air, Esper added.

In his cabinet remarks, Rouhani cautioned against any UK-led attempt to create an international coalition to protect shipping in the Gulf. Iran’s Islamic Revolutionary Guard Corps (IRGC) were responsible for security in the Strait of Hormuz, he said.

Both reformist and conservative Iranian newspapers have expressed concern at the appointment of Johnson as British PM. Many have described him as the “British Trump”. The conservative Resalat newspaper published a cartoon of Johnson serving as a British butler and being patted on the head by Trump at his desk in the Oval Office. The hardliners were coming to power throughout Europe, Resalat warned.

‘No talks under any circumstances’
There is typically some discord between Iran’s pragmatic moderate politicians such as Rouhani and the hardliners when it comes to relating Iran’s latest position as regards the US “economic war” (though both camps are agreed on that particular description) and this was shown on July 24 when the Rouhani position that talks with the US would be possible if Washington first dropped its sanctions was seemingly ignored by the top military adviser to Iranian Supreme Leader Ayatollah Ali Khamenei, who said Tehran would not negotiate with the Trump administration under any circumstances.

Hossein Dehghan, a senior IRGC commander, whose views are seen as reflecting those of Khamenei, was also cited—in remarks reported by Al Jazeera television, but not in direct quote form—as saying Iran would take action if the status of the Strait of Hormuz was altered, and that no country would be allowed to ship oil through it unless all countries could.

Dehghan also reportedly attacked the United Arab Emirates, saying it had become a US operations base for potential attacks on Iran, and repeated earlier Iranian threats to attack all US targets in the region should Washington decide to go to war with the Islamic Republic.

UK mediator reports denied
In other developments, the UK Foreign Office on July 24 denied Iranian media reports that it had quietly sent a mediator to Tehran to negotiate the release of the Stena Impero tanker.

The reports quoted official representative of the supreme leader Ayatollah Mohammad Mohammadi-Golpayegani as saying: “A country that [as a colonial power] at one time appointed ministers and lawyers in Iran has reached a point where they send a mediator and plead for their ship to be freed.”

Britain is referred to by many in Iran as “The Old Fox” because of its alleged misdeeds in Iran a century ago.

July 24 also saw Swedish-based Stena Bulk, which operates the Stena Impero, announcing that it had made contact with the tanker’s crew.

“We had direct contact with the crew onboard the vessel last night by telephone and they’re all okay and in good health and they’re getting good cooperation with the Iranians on board,” company spokesman Pat Adamson was quoted as saying by Reuters.