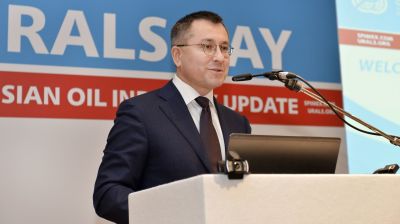 Alexei Rybnikov, the head of the St Petersburg International Mercantile Exchange (Spimex), has an uphill task trying to establish a benchmark for Russian oil - even with the Kremlin’s weight behind him and the support of the nation’s leading producers.

The benchmark first started trading on November 29 but the number of trades and the volume was modest, with just 26 trades worth $2.9mn transacted for 63,300 oil barrels. Data from Spimex shows that initial trading only attracted domestic Russian brokers and shareholders of the exchange, such as Rosneft, Gazprom, Otkritie, Alor, Lukoil and Finam.

For the benchmark to succeed, Rybnikov acknowledges that the bourse needs to attract the big international players. Many of the global commodity traders, such as Glencore and Trafigura, attended a high-profile Spimex event in London in November to promote the contract but will probably remain on the sidelines until the contract gains much deeper liquidity.

“When international investors see domestic investors are actively trading a certain product, it’s a very compelling case for them to go to the same marketplace because they will always know that they can sell to domestic investors when they need to leave the market,” Rybnikov, a bespectacled and bookish-looking former banker, tells bne IntelliNews in an interview in Moscow. “That’s why the international oil trading community will only trade at Spimex if Russian oil majors are trading at Spimex. Without Russians doing things at the exchange – no one will trade.”

The project, which has been underpinned by a Presidential decree, is being developed by the exchange in conjunction with the Russian Ministry of Energy, the Central Bank, the Federal Anti-Monopoly Commission and the country’s leading producers. With energy prices having halved in the past two years and Russia trying to get to grips with its worst budget deficit since 2010, the Kremlin is seeking to maximise its crude revenue.

Spimex also crucially has the backing of the all-powerful energy czar Igor Sechin, whose Rosneft company holds the biggest stake in the exchange. Rosneft is also responsible for 25-30% of trading of refined products on Spimex while gas monopoly Gazprom is the biggest seller of gas, according to Rybnikov.

Taking Urals to its peak

The Russian authorities believe trading of Urals as a benchmark would allow them to earn more money from the Urals blend - which has mainly traded at a discount to Brent - arguing that production volumes signficantly exceed those of the Brent blend. Urals is currently priced in the physical market at a discount to Brent by pricing agencies. The discount has halved over the past decade to $2-$3 a per barrel in 2005, but Rybnikov hopes trading in the contract will narrow the premium even more.

The high sulfur content of Urals, relative to Brent, is another obstacle Spimex has to overcome before the contract gains international recognition.

Rybnikov says one solution is to separate high sulfur oil into a separate stream out of Ust-Luga oil terminal on the Russian part of the Gulf of Finland, or force companies pumping heavy oil to refine more heavy oil at their own refineries.

“This requires more investment into refineries,” he says. “This decision is required to be taken to ensure the predictability and quality over the longer term. As long as you have predictability, you can get a premium from your buyers and it’s a compelling move to improve the marketing position for Russian crude oil.”

To help lure foreign traders, the regulator recently granted non-Russian firms direct access to exchange-traded commodities and their derivatives. Further measures should be taken, including providing a cash settlement option and allowing traders the ability to settle with a partial cargo.

This is the second bid establish a Urals benchmark. A decade ago, the Russian Ministry of Economic Development managed to get REBCO (Russian Export Blend Crude Oil) futures going on the New York Stock Exchange but the initiative failed after Russian producers declined to get involved.

The contract will initially be traded only in dollars even though Putin and other senior politicians had long wanted Russian crude to be traded in only rubles.

Rybnikov says the bourse has received approaches from strategic investors and commodity exchanges. Even though the trend is very much for exchanges to consolidate, Spimex intends to plough its own furrow in a bid to improve Russia’s oil price discovery and increase the revenue domestic companies generate from trading.

Neither is Spimex planning on an initial public offering, even though Rybnikov admits that capital is scarce.

“Capital is always scarce but we tend to use capital for business development rather than sit on cash deposits and earn interest income,” he says. “We are not asking for any money from the shareholders to fund the development plans. We can fund everything from current revenue and still provide a return to shareholders.

Spimex, which was set up in 2008, only became substantially profitable in 2013 two years after Rybnikov joined. Before then, the exchange was generating losses in the range of several million dollars but now it has started paying some dividends to its shareholders.

A government decree forcing producers to sell up to 10% of their domestic transport fuel supplies there helped Spimex turn a corner. It also offers spot and derivatives trading in oil products such as jet fuel and gasoline and hopes to expand its trading next year to the Eastern Siberia-Pacific Ocean (ESPO) pipeline brand.

The Urals contract has about 18 months to develop sufficient liquidity, Rybnikov notes. The economics graduate from Moscow State University speaks quietly and chooses his words carefully - knowing full well that the clock is ticking and that his masters are impatient for results.

Trying to attract foreign investors and deepen liquidity was a major part of his job when he ran the Moscow Interbank Currency Exchange (Micex) and he did it successfully – even though the exchange’s reputation was rocked by stoppages and suspensions in the aftermath of the 2008 financial crisis.

Rybnikov ran Micex for six years until 2009 but his track record wasn’t enough to keep his place, and Konstantin Korishenko, a former deputy chairman at the Central Bank of Russia (CBR), was parachuted in to replace him.

Rybnikov was a key advocate of Micex’s merger with rival platform RTS and the creation of a central depositary, but it was his successors who earned the plaudits when the union finally occurred in 2011.

“I was always in favour of a combination between RTS and Micex and we argued on that for a long time,” says Rybnikov, who sounds sanguine about being squeezed out at Micex. “The combination and the form of the transaction they choose was not ideal. It could have been done better but the end result is not bad. They ended up having one unified exchange in Russia, which is good.”

Despite his views about collaborating with other Russian exchanges, Spimex is strangely reluctant to work with Micex, which has since been renamed the Moscow Exchange. The main Russian bourse has a deep pockets of liquidity, institutional credibility with foreign traders and high-speed connections – all the attributes which Spimex lacks.

Belarus’ turn to China
2 days ago
East and West clash in Bulgaria’s snap general election
2 days ago
Old faces set to keep ruling Bosnia post-election
2 days ago
Georgia’s border clogged with thousands of Russians fleeing the Kremlin’s mobilisation
2 days ago
Meloni won the elections, but her programme won’t make Italy the next Hungary
3 days ago