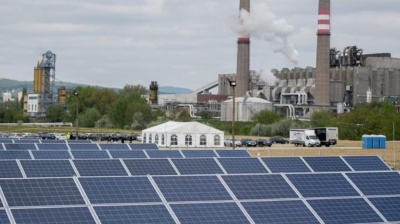 The country's biggest photovoltaic plant in Bukkabrany.
By bne IntelliNews May 9, 2019

Hungary plans to reduce its greenhouse gas (GHG) emissions by at least 52% compared to 1990 levels by 2050, but the government is aiming for a 85% reduction during the period, according to the National Energy and Climate Change Plan published by the Innovation and Technology Ministry on May 8. The energy strategy is based on two pillars, nuclear and renewable energy.

The EU climate and energy policy framework foresees a reduction of at least 40% in GHG emissions at EU level by 2030.

Hungary's target is to raise the share of renewable energy within energy consumption to 20% by 2030, according to the report, from around 14-15% at present, thanks to the predominance of biomass.

The installed capacity of renewable energy sources is expected to reach 4,600MW by 2030, including more than 4,000MW of solar park capacity.

2018 was a record year for new solar deployment in Hungary with 410MW of new capacity added, bringing cumulative installed PV capacity to 700MW.

Analysts expect some 400-600MW of additional capacity installed this year and in 2020.

Production of green energy could climb over 6,500GWh by 2030, with solar parks accounting for over 70%, according to the forecast.

Hungary's long-term energy plan sets out the security of supply as the main priority. The plan foresees a 14% increase in final energy consumption between 2015 and 2030.

The share of electricity and oil in the energy mix is expected to grow.

Besides renewable energy, the long-term energy strategy also places emphasis on nuclear energy, which can play a key role in the decarbonisation of the electricity sector.

The four blocks of Hungary's sole nuclear power plant have a combined capacity of 2,000MW. Hungary is expanding the Paks power plant with two new blocks added with 1,200MW each. Construction of the €12.5bn project carried out by Russia's Rosatom has not started yet and will certainly miss the 2025-2026 deadline.

Interconnection to the European electricity system is also important in guaranteeing the security of supply.

The strategy stresses the need to diversify gas supplies as well as to boost the efficiency of gas use.

As the long-term gas contract with Gazprom expires in 2021, Hungary has been looking to diversify its import sources to reduce dependency on Russian gas.

Two-way interconnectors with Slovakia, Croatia, and Romania have been established in recent years.  The government would be willing to buy gas from Croatia, which is building a liquefied natural gas terminal, and from Romania.

Hungary is in talks on the acquisition of a stake in an LNG terminal off the Croatian island of Krk. Hungary made an offer to buy a 25% stake to further diversify its energy supply only if the country can acquire gas from the terminal at a competitive price.

NBU lionises Smolii, clarifies cancellation of Eurobond decision
1 day ago
No protests, but police continue to randomly arrest pedestrians on Belarus Independence Day
23 hours ago
Governor Smolii’s departure from the NBU creates the risk of devaluation of the hyrvnia or default on its debt this year
1 day ago
Croatia heads for hung parliament in July 5 election
1 day ago
Evidence of massive ballot stuffing emerges in Russia's referendum on constitutional changes
2 days ago