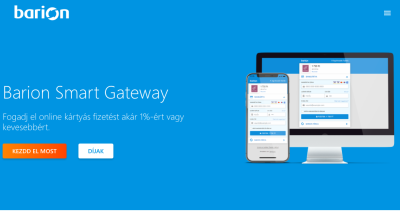 Tamas Biro and Sndor Kiss, the founders of Barion
By bne IntelliNews June 6, 2019

Hungarian mobile and online payment company Barion on June 6 said it is considering moving its headquarters to another country in Europe because the local regulatory environment puts it at a competitive disadvantage.

Barion, founded by technology company Sense/Net offers a quick, cheap, and simple payment platform, a competitive alternative to Stripe or PayPal. It currently has 6,000 corporate customers and 2,600 website partners, with 95% of its transactions being Hungarian forint-based. The company facilitates transactions of several billion forints a month.

"The very lengthy process of online data registration, in the course of which new users are required to provide a good deal of irrelevant personal data is a huge competitive disadvantage when acquiring new users," said founder and CEO Sandor Kiss.

"The other sore point is the extremely high financial transactions duty. It's telling that in Hungary just three fintech companies have got operating licences so far, while the number is close to 100 in Lithuania," he added.

Parliament scrapped the transaction tax from January 1 on transfers below HUF20,000 (€62) for retail accounts were taxed 0.3%, however, over that amount the duty remained unchanged at 0.3%. Hungarian banks and financial service providers have lobbied for the complete withdrawal of the tax, which generated HUF233bn in reveneu for the budget in 2018, up from HUF217bn in the previous year.

The Hungarian banking transaction tax drives market players and private individuals to use cash rather than electronic payment methods. Some 80% of all payment transactions were carried out in cash last year. But extensive use of cash negatively impacts the economy in several ways, such as the high cost of maintaining a large cash volume, easier tax evasion and expansion of grey and black markets.

Czech businessman Petr Kellner invested 6mn in Barion through Home Credit Group late in 2017. The capital investment pushed Barion into the group of the most valuable start-ups in Hungary. It instantly got into the class right behind the big four, Prezi, Ustream, LogMeIn and NNG.

All four Hungarian companies are now internationally recognised multinational businesses. Barion used to proceeds to expand abroad and now operates in the Czech Republic, Germany, Austria and Slovakia, in addition to Hungary.

Barion has also set up a separate division to utilise the data it collects facilitating transactions for targeted advertising. Last year, Barion had net revenue of HUF160mn and an operating loss of HUF163mn.