Georgia’s exports rise faster than imports in January, but by not enough to close the gap 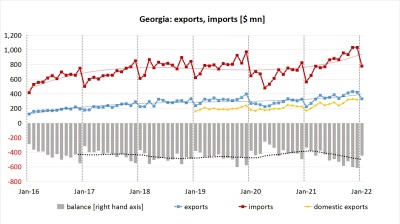 Georgia’s exports increased by 46.7% y/y to $331.3mn in January, reaching a level that was 24% higher compared to January 2020 as well, according to data released by the statistics office Geostat.

It was one of the highest annual growth rates posted by Georgia’s exports recently and significantly faster than the pace of imports – but this was not enough to stop the trade gap from further widening. Georgia’s trade gap increased by 33% yoy to $447mn in January – far from the deficits in excess of $600mn seen in November and December but still a lot for the first month of the year. The gap was only $337mn in January 2021 and $377mn in January 2020.

The widening trade gap is a result of the massive size of the imports, which even for small growth rates are still offsetting even impressive growth rates posted by exports. The ballooning trade gap is, however, to some extent, an effect of the rising prices that are driven by more expensive energy and commodities. Oil and gas accounted for 12% of Georgia’s imports in 2021 (10% in 2020), while copper ores accounted for another 7.3% (up from 7.2% in 2020). The country imports a broad range of products. The automobile ranks as the category with the largest share in Georgia’s imports, but this rather reflects the automobiles further re-exported in the region.

As regards the exports, the copper, copper ores and ferroalloys account for roughly 30% of Georgia’s exports. More exotic export items are posing high growth rates, though.

Georgian MPs want to rid the country of oligarchs, but not all of them
Georgia’s border clogged with thousands of Russians fleeing the Kremlin’s mobilisation
More pain stored up for Emerging Europe in 2023