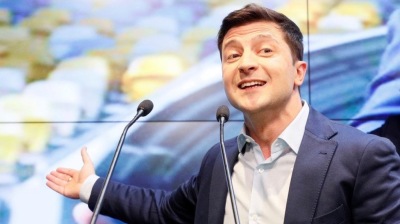 Ukrainian President Volodymyr Zelenskiy is releasing a question a day from a total of five for a poll that will be held just before regional elections that have become the talk of the town and captured the news agenda in the process
By FPRI BMB Ukraine October 15, 2020

Ukrainian President Volodymyr Zelenskiy announced on October 14 plans to conduct a five-question poll during the upcoming elections on October 25. Unlike a referendum, the results of this poll will not be legally binding, but rather act as a form of “direct democracy” and give the authorities an idea of “what people really think,” the president’s announcement says.

“This is a ‘dual purpose electoral weapon’: on the one hand, it’s an experiment in implementing Volodymyr Zelenskiy’s election promise about popular polls […] and on the other hand, it’s an election strategy,” writes political analyst Vladimir Fesenko, in a Facebook post responding to the initiative.

The way he sees it, conducting the poll at the same time as the local elections will mobilise younger voters who support the president and his party, Servant of the People. However, Fesenko also points out that it could equally drive away participation among seniors.

“Where it has an undoubted effect is [in] the reprogramming of the final stage of election campaigning,” Fesenko continues. Indeed,” Zelenskiy’s poll” has now become the main topic of conversation – and since he is releasing the questions over the course of the next five days, the news of the day is guaranteed to come from Zelenskiy.”

In other words, the poll’s roll-out – and the debate its questions will provoke – are allowing the president and his party to set the agenda for the news cycle and political discourse in the lead-up to election day, which will, in turn, upset the electoral strategies that their political opponents planned for the final phase of campaigning.

However, the procedure for conducting the poll could prove to be a weak point, Fesenko warns. “Spontaneous (voluntary) voting at polling stations can’t be controlled from the point of view of legal purity. Consequently, the results of such a survey will be perceived with a great deal of scepticism,” he says. “And I’m not even talking about the financial and other organisational and procedural ‘details’ that the ‘devil’ could be hiding in.”

Privatisation efforts in Uzbekistan are moving to a practical level. The newly appointed State Asset Management Agency head has started to implement the presidential decree on privatisation with a new zeal.

It has been an exceptional month for commodity markets, with growing inflation expectations increasing investor interest in the assets. Meanwhile, fundamental developments, particularly in the oil market, have only provided a further boost.

COMMENT: OPEC+ puts off production cut decision for a month
1 day ago
COMMENT: Uzbek privatisation - this time it seems to be for real
1 day ago
ING: Commodity supercycle calls grow
2 days ago
FPRI BMB Ukraine: The US takes on Kolomoisky
3 days ago
ING: Turkey’s inflation remains on an upward path
4 days ago