Floods of foreign companies coming to Uzbekistan to implement projects 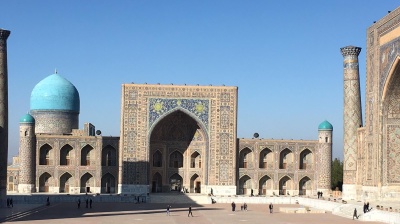 The opening up of the Uzbek economy has foreign investors excited and beating a track to Tashkent / bne IntelliNews
By bne IntelliNews February 21, 2019

The opening of Uzbekistan has caught the headlines as the country moves out of its hibernation and attempts to join the global market. Most of the attention has been on the current ruling regime’s reform drive, culminating in the country’s smash hit sovereign bond debut this month. That interest has now turned into a flood of trips by leading companies to explore the opportunities on offer in Central Asia’s most populous country and, as the only one of the five ‘Stans to share a boarder with all the others, the regions natural production base. Executives are arriving in Tashkent to see how serious the Central Asian nation’s efforts to open the country really are.

The government doesn't really need to issue a bond as debt is low and its reserves are large. The issue was more of a calling card for international investors and a benchmarking exercise to allow the leading corporate to price their up coming bonds. Investors flocked en mass to buy up Uzbekistan’ 5-year and 10 year notes this month and foreign companies appear to be as hungry to implement projects in the ex-Soviet state of 32mn people.

Welters of reports on exploratory meetings have been coming out of Tashkent. Thanks to its large population – the third largest in the Commonwealth of Independent States (CIS) and one of the fastest growing -- Uzbekistan has a relatively diversified economy. In addition to the traditional cotton farming (cotton is part of the national emblem), the deserts in the middle of the country are replete with minerals – especially gold. Its agricultural potential is large. The population make the basis for an attractive consumer business and one of the few things the former president Islam Karimov did organize is a well developed automotive industry, based in Andijan that exports low cost cars to the other CIS markets, and Russia in particular.

Reports from this month alone included an agreement on geological exploration and pilot production at prospective areas for gold and tungsten mining signed between the Geological Survey of Turkey (MTA) and the Uzbek government. The project areas include Sarytau, Khurob and Aydym-Djetimuu fields in Uzbekistan’s Navoi Region and Jizzakh Region.

The sides plan to carry out “aerogeophysical work, remote sensing, geochemical analysis of samples, geochemical prospecting, map-composition work and well drilling” within the three deposits this year. As much as $2mn in foreign direct investment will be directed at geological exploration works for the project.

Gold, estimated to make up around 20% of Tashkent’s exports, is not the only point of interest for Turkey, which has also been actively investing in Georgia and Azerbaijan.

The potential projects were discussed on February 14 at a meeting featuring Energy Minister of Uzbekistan Alisher Sultanov and Deputy Minister of Energy and Natural Resources of Turkey Mithat Zhansiz.

The Uzbek government is hoping to generation approximately 20% of the country's electricity from renewable energy sources by 2032 and its geography is ideal for solar and wind power. Uzbekistan hopes to eventually increase its total renewable electricity generation to 9,343mn kWh and the Uzbek state-run energy firm Uzbekenergo plans to invest a total $4.4bn in 14 projects this year.

Agriculture is also a big focus for potential investors. Earlier this month, Uzbekistan and France signed a memorandum to create two laboratories for identifying products containing genetically modified organisms (GMOs) along with toxic organic compounds. Uzbekistan has been diversifying its agriculture sector away from the decades of dependence on monocropping cotton and increasing the production of other agricultural food products.

The Central Asian nation wants to increase exports of agricultural products to EU countries amongst other directions and food processing is a very prospective industry. China, meanwhile, one of the major trade partners of the Central Asian region, is also seeing growing demand for non-GMO food.

Telecoms is another sector that was developed early, but has been plagued by problems – not least the hundreds of millions of dollars in bribes demanded by Gulnara Karimova, the daughter of former president Karimov, how is now reportedly under house arrest for her crimes.

Local Uzbek media reports from last week indicated that the Swedish telecom company Ericsson is considering resuming its operations in Uzbekistan following a seven-year hiatus, citing the company’s general director for Central Asia and Mongolia, Aydin Abzhanbekov, as saying during an Uzbek-Swedish business forum. Ericsson has operated in Uzbekistan since 1998 until suspending its services in 2012 when the country was ruled by autocrat Islam Karimov.

“At the moment, we are establishing and restoring contacts with potential customers in the country,” Abzhanbekov said, according to the report.

Uzbekistan is working hard to trade in its “former Soviet Republic” image and return to the sparkle of “ancient Silk Road way station” to develop tourism. Tourism is a very ancient business for Uzbekistan indeed. The legendary city of Samarkand attracted the likes of Alexander the Great, who famously said: “See Samarkand and then you can die.” The government is now throwing everything in to developing the sector and offered extremely generous investment incentives to any firm that is willing to come and build the hotels during a recent investment forum in Berlin that are largely missing from the country now.

Local media report that Kuwait-headquartered Alshaya Group is interested the possibility of privatising Uzbek hotels, including the iconic Soviet-era “Uzbekistan” hotel in the heart of Tashkent, as well as constructing new hotels in the ex-Soviet country.

The Central Asian nation currently has 910 hotel and accommodation facilities - the authorities hope to expand the number of hotels to 3,000 by 2025 due to an increasing inflow of tourists following the introduction of visa free regimes to multiple countries. The number of tourists visiting Uzbekistan in 2018 rose to 5.3mn, up from the 2.7mn recorded in 2017.

Among other potential foreign investment projects, Russia’s MetProm is set to construct a €286mn Tashkent Metallurgical Plant (TMZ) by December 2019. Its construction is partially funded by Roseximbank. A number of Russian companies, including Uralkran, Energoavangard, Veza, Promtreydimpeks, South Ural Plant and Permglavsnab, signed contracts to supply equipment for the new plant, the press service of TMZ said in a statement recently. After reaching full capacity, the plant will annually produce 500,000 tonnes of cold-rolled metal.

“The project is financed by a foreign investor, the Fund for Reconstruction and Development of Uzbekistan, and the loan funds of Roseximbank. Credit lines pass through Asaka and Uzpromstroybank. These funds are allocated under the insurance coverage of the Russian Agency for Insurance EXIAR," the technical director of MetProm, Valery Osin, was quoted as saying in local media.

The number of foreign investment projects in Uzbekistan are likely to keep expanding as the country continues its reform-drive, including plans to privatise its flagship gold producer Navoi Mining and Metallurgical Company (NMMC) and to end the shroud of secrecy over the country’s gold mining sector statistics.

Could casinos be a jackpot for Mongolia’s struggling economy?
57 minutes ago
Africa rallies to Russia’s rescue as EU bans the import of oil products
4 hours ago
Kazakhstan: Swathes of land confiscated from Nazarbayev’s brother ahead of vote
1 day ago
Wolt couriers in Tbilisi go on strike
1 day ago
Jury still out on the effectiveness of the oil price cap scheme on Russian exports
1 day ago