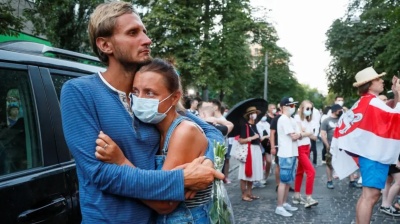 Many Belarusians who fled to Ukraine in 2020 and 2021 are now finding it hard to renew their legal documents to stay in Ukraine, and many are threatened with deportation. Others are stuck in a bureaucratic limbo, not knowing whether they will be able to stay or not.

After the Belarusian regime’s brutal crackdown on any and all dissent within the country following the country's fraudulent 2020 presidential elections, many Belarusians chose to flee to neighbouring Ukraine.

At the time, Ukraine allowed Belarusians a 180-day visa-free stay and was generous enough with visa-issuing and visa-renewals that many Belarusians chose to stay by simply renewing their visas.

However, things changed after Russia (with the Belarusian regime’s help) invaded Ukraine on February 24 this year.

Due to the invasion, Ukraine’s State Migration Service was forced to temporarily shut down and only resumed its operations in May after almost three months.

Regardless of this, many Belarusians began receiving “forced return notices” and fines in May for missing the deadlines to submit the necessary documentation to renew their stay.

According to Vladimir Zhbankov, head of the legal assistance programmes at the Free Belarus Centre, the number of Belarusians affected by this amount to tens of thousands of people.

Many of those affected are human rights activists who fled Belarus in 2020 and 2021 in fear of political repression, and even those who have helped Ukrainian authorities, the Ukrainian army, or the Belarusian volunteers fighting for Ukraine have been affected.

Karyna Patsiomkina, who fled Belarus in fear of political persecution, volunteered to clear debris and dead bodies in Bucha in the Kyiv region and was even awarded a letter of gratitude for her efforts by the Bucha local authorities.

Despite her efforts to assist Ukraine, Patsiomkina received a fine and a deportation notice for staying in Ukraine past the expiry date of her visa.

According to Zhbankov, Ukrainian authorities used to allow Belarusians to stay with or without the necessary documentation before the war and he says that they are only now enforcing deportation laws. In the Ukrainian regions bordering Belarus, Zhbankov claims that the Ukrainian Migration Service has escorted Belarusians out of the country by car.

While the deportation notice does not specify where Belarusians should go, it’s almost impossible for many to receive visas for EU countries, and the only option remaining is therefore Belarus. Due to this, many may choose to not come to the Migration Services and remain in the country illegally, which Zhbankov noted was bad for Ukraine’s national security.

Ukraine’s cutting of financial ties with Belarus has also affected Belarusians in Ukraine, since after February 24, Ukraine’s National Bank blocked the bank accounts of Belarusian nationals and their Belarusian-issued bank cards.

The role of the exiled Belarusian opposition

Belarus’ exiled opposition leader Svetlana Tikhanovskaya’s team recently opened an office in Kyiv, and this office partners with lawyers to help Belarusians obtain a legal status in Ukraine, the procedures for which the Free Belarus Centre called “neither transparent nor predictable.”

The head of the Svetlana Tikhanovskaya Office, Valery Kavaleuski, thinks that Ukraine’s legislation could improve, and should strive to meet EU standards. At the same time, he also acknowledges that the legislation is hard to change, given the war, but hopes that “the practice of applying existing norms will be more sympathetic towards people.”

Kavaleuski is not only co-operating with lawyers but is also in touch with Ukraine’s Parliament Commissioner for Human Rights, Dmytro Lubinets, Ukraine’s National Bank and Ukraine’s Security services. This co-operation has yet to bear fruit, but these kinds of problems highlight and amplify the important role which the Belarusian opposition’s diplomatic work plays for fleeing Belarusians.

While Svetlana Tikhanovskaya’s meetings with Western and Ukrainian officials this spring have focused on sanctions, her meetings with Polish, Ukrainian and Lithuanian officials have also focused on receiving assurances that the Belarusians who are fleeing domestic repression or who reside in these countries will receive the help they need and are not treated as accomplices to the Belarusian regime’s aggressive actions towards Ukraine.

Belarusians are, however, still met with hostile and negative comments and actions abroad, especially in Poland and Ukraine, both on the street and from government authorities.

Nevertheless, tens of thousands of Belarusians have been able to flee, obtain visas and stay in neighbouring EU countries this year, and in early July, Poland agreed that Belarusians fleeing Ukraine would find shelter in Poland.

The work is progressing, with Lubinets allegedly having promised Kavaleuski that “no Belarusian who helps Ukraine will be expelled from the country.”

As the Belarusian regime continues its rampage against any dissent within Belarus, further co-ordination and co-operation between the exiled Belarusian opposition and Western and Ukrainian authorities will strengthen its role in assuring the safety of Belarusians abroad. Ultimately, this strengthens the opposition’s legitimacy, while further delegitimising the regime in Minsk.