Fear and mistrust on the Ukrainian campaign trail 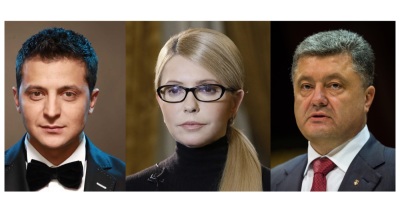 Scepticism toward the government and perceptions of endemic corruption are almost universal among Ukrainians, says Gallup
By Ben Aris in London March 25, 2019

The strange nature of Ukraine’s presidential election race is it is not about who the voters like the most, but who they dislike the least. None of the candidates have real popular appeal but voters will have to choose someone. With only a week to go before the country goes to the polls a Gallup poll found that less than one in ten Ukrainians trust their government – the lowest level of trust in the world and its lowest level ever in Ukraine, the pollster reported on May 22.

“Just 9% of residents have confidence in the national government, the lowest confidence level in the world for the second straight year. This is far below the regional median for former Soviet states (48%) as well as the global average (56%) in 2018,” Gallup said in a report on the poll’s results.

The Ukrainian comic and presidential candidate Volodymyr Zelenskiy is in the firm lead in the polls in the run up to the vote, followed by opposition leader Yulia Tymoshenko who is neck and neck with incumbent President Petro Poroshenko. It seems clear that Zelenskiy will progress to a second round runoff in April – as no candidate has any chance of taking 50% in the first round needed to win the elections outright – but it remains very unclear who he will face. The difference between Tymoshenko and Poroshenko is inside the margin of error in the polls.

However, despite the palpable disapproval of Poroshenko, who is far in the lead in the “won't vote for under any circumstances” polls, Zenon Zawada at Kyiv-based brokerage Concorde Capital predicted last week that the most likely outcome is a second round between Poroshenko and Zelenskiy as the president has “significant administrative resources at his disposal.”

Zelenskiy’s strong showing is understood as a protest vote against the ruling elite that has manifestly failed to delivery on the promises inherent in the Euromaidan uprising in 2014. Since then the standard of living has fallen precipitously and over a fifth of the working population has taken advantage of the visa-free regime negotiated by Poroshenko to leave the country and look for work in Ukraine’s EU neighbours.

The current trust rating is even lower than the 24% rating for the government in the era of Viktor Yanukovych, which the crowds ousted in 2014 because of his rampant and venal corruption.

“Early in Poroshenko's presidency, there were signs that the then-new president was starting to rebuild Ukrainians' shaky trust in their leadership — 24% were confident in their government and 48% approved of Poroshenko's job performance. However, these hopes quickly faded as many Ukrainians saw the government failing to deliver on what protesters had demanded during the Maidan revolution. Since 2015, confidence has been no higher than 14%, Gallup found.

Gallup backed this pessimism up, finding the most voters are expecting some sort of fix by the incumbent administration.

“The current level of distrust extends to other agencies of the government as well, including those in charge of administering the election March 31. Just 12% of adults in Ukraine in 2018 said they have confidence in the honesty of elections, representing a decline from the 26% who held this sentiment in 2014, indicating growing distrust toward the electoral system in the country,” Gallup found.

Part of the disappointment is over the endemic corruption in the Ukrainian government. Despite Poroshenko’s pro-west rhetoric he has vigorously resisted donor pressure to crack down on corruption. Nine out of ten (91%) of Ukrainians believe the government is riddled with corruption and Poroshenko himself is mired in a defence sector corruption scandal. Indeed, the issue is highlighted by the case of Roman Nasirov, a high ranking official and friend of Poroshenko’s – the first “big fish” to be indicted by the National Anti-Corruption Bureau of Ukraine (NABU) on corruption charges. But despite promises to the contrary not only was Nasirov not charged or put on trial, in what was supposed to be a litmus test, Nasirov is currently running as a presidential candidate.

These doubts are likely only further reinforced by the widespread corruption that most Ukrainians (91%) see throughout their own government, says Gallup. Among other allegations, Poroshenko is mired in a scandal relating to the sale of Russian components to the Ukrainian defence industry at inflated prices. This has been seized on by one of his rivals in the upcoming election, former prime minister Yulia Tymoshenko, as well as members of parliament who have begun impeachment proceedings against him.

“Scepticism toward the government and perceptions of endemic corruption are almost universal among Ukrainians,” Gallup said.