European car production could fall 40% due to energy crisis 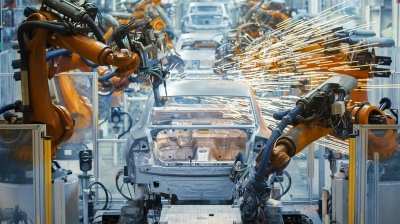 European car makers will see production fall by up to 40% due to the energy crisis as costs jump more than ten-fold and demand collapses. / bne IntelliNews
By bne IntelliNews October 13, 2022

European car production could fall by as much as 40%, or more than 1mn vehicles, per quarter out to the end of 2023 as a result of the energy crisis, S&P Global Mobility said in a report entitled “winter is coming” released on October 11.

Soaring energy prices are driving an increasing number of European industries into loss. As bne IntelliNews reported, Europe’s industry is shutting down. Energy-intensive businesses such as metal, fertiliser and petrochemical concerns have already begun to reduce production or stopped work completely after gas and energy prices increased ten-fold this year.

Automotive production is key to several economies in Western and Central Europe that employ thousands of people. Exacerbating the problem is that many Western economies are already in recession, or are about to go into recession, killing off demand for new cars. In a bleak prognosis, the IMF predicted that a third of the world’s countries will go into recession in the next 12 months and that while this year’s crisis will be the worst since the 1970s, next year’s crisis “will be worse.”

Still, so far the car-making sector is holding up well.  Hungary's automotive industry, the country’s biggest manufacturing sector, rose 58% year on year in August, albeit from a low base recorded during the pandemic, and the sector is also doing well in Czechia so far.

S&P Global Mobility said the auto industry's supply chain was already in trouble after severe supply chain disruptions caused by the coronavirus (COVID 19) pandemic but had started to recover last year as the global economy bounced back. Now energy has risen to all-time highs the industry "may face extensive pressure" from soaring costs or even power cuts, the report said, reports Reuters.

"With energy prices in Europe skyrocketing... a harsh winter could place certain automotive sectors at risk of being unable to keep their production lines running," the report said.

S&P Global Mobility said costs for car production have already risen to between €687 ($667) and €773 per vehicle, up from a pre-energy crisis level of €50. Previously the consultant forecasted European car assembly plants would produce between 4mn and 4.5mn units per quarter but has cut that estimate to as little as 2.75mn to 3mn units per quarter due to the energy crisis.

The slowdown will have global consequences as Europe exports car parts around the globe. Russia’s car industry has almost entirely collapsed, as it was heavily dependent on European imports of key components. Russia’s car production fell 84% y/y post invasion, but has started to recover somewhat in the last few months, but was still down 62% y/y in August. Russian carmakers have already begun to drop some features like airbags due to the lack of components after sanctions and self-sanctioning regimes came into effect.

For individual countries across Europe, the auto forecaster looked at six factors, including the size of a country's deficit, debt relative to gross domestic product (GDP), level of energy self-sufficiency and gas storage, Reuters reports.

While automotive powerhouse Germany has relied on Russian gas and is phasing out nuclear power, it has "more budgetary headroom to ride out the energy storm" than some other European countries such as Italy, the report said, adding that European Original Equipment Manufacturers (OEMs) probably have enough financial capacity to ride out the storm this year, but if nothing changes, the smaller manufacturers will start to go to the wall next year.

"I'm worried we'll have some highly skilled craftsman shops in the region either go through forced bankruptcy or just hang up their hats," Edwin Pope, S&P Global Mobility principal analyst for materials and lightweighting, told Reuters.