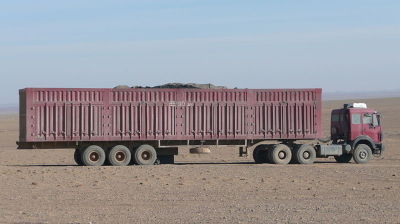 A coal truck on the road from Mongolia's giant Tavan Tolgoi coal mine to the Chinese border. Rising coal exports to China have helped buoy the Mongolian economy recently.
By Clare Nuttall in Bucharest June 6, 2018

Mongolia and other Eurasian commodities exporters were among the countries singled out by rating agency Fitch in a new report as being vulnerable to a potential slowdown resulting from China’s efforts to rein in debt.

Beijing has been seeking to stabilise its corporate debt to GDP ratio as the debts of state-owned enterprises (SOEs) and local governments have soared in recent years, even though China’s general government debt remains modest by international standards. These efforts are set to slow business investment and temper China's medium-term economic growth — and given the sheer size of the Chinese economy, the world’s second-largest, this would have a serious impact on the economies that supply it with raw materials.

Fitch projects a sharp capex slowdown that would reduce China’s GDP growth by around 1pp per year for several years relative to baseline. Fitch analysts further estimate that global oil and metals prices would be 5%-10% lower than under its baseline scenario — which again would have potentially dramatic consequences for Eurasian exporters, several of which have only recently emerged from economic contractions prompted by low oil prices.

While net commodity exporters across Eurasia would be affected by a decline in direct exports to China and weaker terms of trade, according to Fitch, the rating agency considers that within the region Mongolia would be most at risk from such changes.

“Mongolia, which has made progress under its IMF programme, would probably be the most vulnerable of Asia's net commodity exporters,” the report says. “China accounts for all of its coal and iron ore exports, and it would be difficult to divert them to other markets.” Sandwiched between China and Russia, Mongolia is itself a major commodities producer, and with a small domestic population, exports to China are critical to Mongolia’s economy.

Trade with China accounts for approximately 60% of Mongolia’s total trade, while trade with Russia makes up another 15-20%, according to data released by the statistics office in Ulanbataar last month. Highlighting the role the Chinese market plays in Mongolia’s economy, the recovery of GDP growth last year to 5.1% from just 1% in 2016 was largely due to higher Chinese coal imports, coupled with Mongolia’s $5.5bn bailout agreement with the International Monetary Fund (IMF).

Looking forward, the $6bn underground expansion of the flagship Oyu Tolgoi copper and gold mine is expected to be completed by 2019, and will further boost growth, said a recent IMF report on the country. But this too hinges on Chinese demand as almost all of Oyu Tolgoi’s production so far has been sent to China.

Both Mongolia and Russia have benefitted recently from the combination of China’s decision to end coal imports from North Korea and the restructuring of the Chinese coal industry, bne IntelliNews reported recently. The eventual aim is to curb rampant pollution by cutting coal consumption and switching to cleaner forms of energy, but in the meantime, coal remains the top source of energy in China and the fall in domestic production has led to an increase in imports. And China’s coal consumption actually increased in 2017 due to a slump in hydropower generation.

Aside from Mongolia, exporters such as Azerbaijan, Kazakhstan and Russia would also be hit by a slowdown in China or a new fall in oil prices even though, according to Fitch, they have strengthened their policy frameworks, having being forced to deal with the slump in oil prices in recent years.

“The impact of a Chinese investment slowdown on Russia, for example, should be softened by greater exchange rate flexibility, inflation targeting and a more conservative fiscal stance, and might not be as severe as estimated by the model, which is based on historical relationships,” the report says. “Kazakhstan and Azerbaijan have followed similar adjustment paths, although Azerbaijan has lagged and appears more exposed.”

Turkmenistan is not mentioned in the Fitch report, but China is the sole importer of its natural gas at present. A slowdown in China would therefore be another big blow for Turkmenistan, which relies heavily on hydrocarbons exports — the recent fall in oil prices has already sent the once affluent nation into an economic crisis. Its authoritarian government has been reducing formerly generous welfare subsidies due to declining government revenues, and various foreign companies operating in the country were recently revealed to be waiting for payments dating back up to five years.

Not only that, but China has become a massive investor into transportation and energy infrastructure across Eurasia as well as other world regions, a process that has accelerated with the launch of the Belt and Road Initiative (BRI).

Concerns over China’s growing debt burden have been mounting for a couple of years now, culminating in rating agency Moody’s May 2017 decision to downgrade the country’s rating from A1 from Aa3 and assign it a negative outlook. Moody’s said at the time that the decision was based on its expectation that “China’s financial strength will erode somewhat over the coming years, with economy-wide debt continuing to rise as potential growth slows.” It also anticipated that while “the authorities’ commitment to reform is clear” — as shown, for example, in steps taken to contain the rise in state-owned enterprise debt and discourage certain SOEs from further investment — “we do not think that the reform effort will have sufficient impact, sufficiently quickly, to contain the erosion of credit strength associated with the combination of rising economy-wide leverage and slower growth,” Moody’s said at the time.

And while debt has grown, the pace of growth of the Chinese economy has slowed, declining from its peak of 10.6% in 2010 to 6.7% in 2016, and it is expected to fall below that level in the coming years, even though it inched back up to around 6.8% in 2017 — especially if the government continues its deleveraging efforts.

“The slowdown in the Chinese economy that would be necessary to stabilise its corporate debt ratio over the medium term … would have significant knock-on effects for the global economy,” says the Fitch report.

“The economic effects would be strongest for emerging markets with high commodity dependence or close Chinese trade links, while the sovereign credit impact would also depend on external and fiscal buffers, as well as the policy response.”

Eurasian exporters aren’t the only countries expected to be hit by a slowdown resulting from Chinese deleveraging, with an impact expected to be felt as far afield as Latin America. The percentage difference from baseline GDP growth by 2020 as a result of a Chinese slowdown in Chile is projected at -2.2%, according to Fitch’s calculations using Oxford Economics’ global model. Among other major emerging markets, the figure for Russia is -1%, Poland -0.5% and Turkey -0.4%. 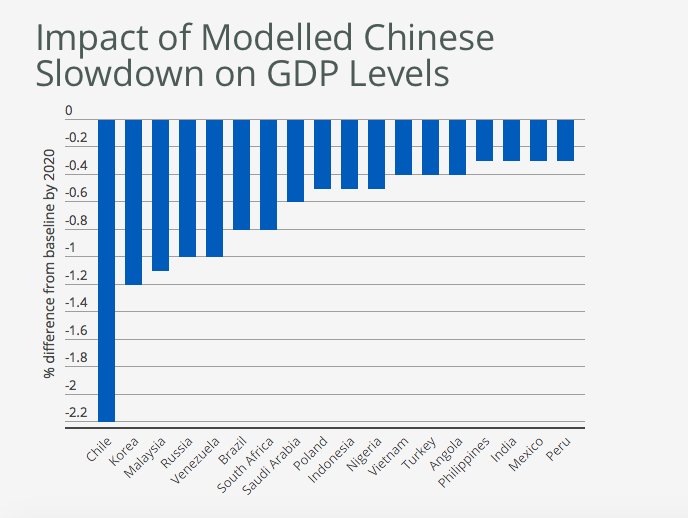