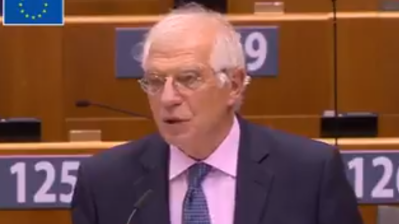 Things must "go to one side or the other, depending on what happens in the next days" Josep Borrell told the European Parliament. / EU, social media, screen grab.
By bne IntellIiNews September 15, 2020

The European Union’s relationship with Turkey is at a turning point, the bloc’s top diplomat said on September 15. Speaking in the European Parliament, Josep Borrell urged Ankara to back down from conflict in the eastern Mediterranean and uphold the basic human rights of its citizens.

“[Our ties] are at a watershed moment in history, which will go to one side or the other, depending on what happens in the next days,” Borrell said.

EU leaders are set to meet at a September 24-25 summit to discuss Turkey and further consider whether a strategy driven by sanctions should be adopted. Ankara’s gunboat-backed showdown with bloc members Greece and Cyprus over gas and oil exploration entitlements in various parts of the eastern Mediterranean is top of the agenda, while the Turkish interventions in the Libyan and Syrian civil wars, and Turkey's bellicose posturing on the side of Azerbaijan following its border skirmishes with Armenia in July, are also causing consternation, with eurocrats concerned that Turkey is increasingly asserting itself as a regional bully. Turkish President Recep Tayyip Erdogan’s stark lurch into authoritarianism since the failed coup against his administration in July 2016 had already rid Brussels of any notion that Turkey could progress its decades-long ambition of becoming an EU member in the foreseeable future.

Greek Prime Minister Kyriakos Mitsotakis called on September 15 for “tangible solidarity” from the EU in tackling both the migrant crisis and east Mediterranean tensions with Turkey.

Mitsotakis was reported by Reuters as saying that Greece was ready to enter exploratory talks with Turkey “immediately” on the maritime zones if Ankara ended its “provocations” in the region.

Last week brought a war of words between French President Emmanuel Macron, Greece’s most outspoken ally in the eastern Mediterranean dispute, and Erdogan. Macron drew the wrath of his Turkish counterpart by stating that his problem is not with the Turkish people, for whom he has great respect, but with the Erdogan government. Erdogan responded with characteristic angry rhetoric on September 12, telling Macron “not to mess” with Turkey.