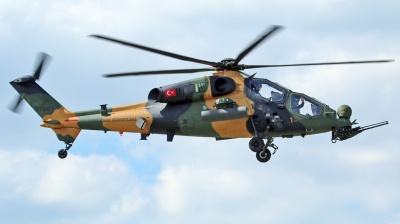 Turkey’s T129 ATAK attack helicopter is based on the same airframe as the AgustaWestland A129 but is fitted with Turkish-made avionics and weapons.
By bne IntelIiNews July 28, 2020

Turkish President Recep Tayyip Erdogan’s stated goal to end all of Turkey’s dependency on foreign suppliers for building weapons by the country’s centenary in 2023 is in no way realistic, Forbes has reported, adding that hitting the target by the end of the decade also looked infeasible.

Turkey’s defence industry projects are not indigenous systems but rather licence-built Turkish variants of foreign systems, it added. An example is Turkey’s MILGEM national warship project—reportedly, only 60% of the parts supplied to build its frigates and corvettes are local.

Looking at the under-construction amphibious assault ship, TCG Anadolu, which will become the Turkish navy’s flagship, the article noted it has the same design as Spain’s Juan Carlos I. Meanwhile, Turkey’s T129 ATAK attack helicopter conspicuously resembles the AgustaWestland A129 because it is actually based on the same airframe and then fitted with Turkish-made avionics and weapons.

Turkey tried to strike a deal to sell 30 of the helicopters for $1.5bn to Pakistan, but was told it needed US export licences as the aircraft has US-built engine parts, the article noted.

It also outlined how Turkey’s main Altay battle tank is heavily based on the South Korean K2 Black Panther, while the Turkish T-155 Firtina artillery guns are based on South Korea’s K-9 Thunder system. They are built under licence with Turkish components and modifications.

Turkey has made F-16 fighter jets under licence for years but has never claimed it conceived of, designed or built the planes from scratch.

Istanbul based Re-Pie invests $12mn in Switzerland based Colendi

Switzerland-based Colendi has raised, via its UK-based parent Colendi Holdings Limited, a total of $30mn in a Series A funding round, ... more