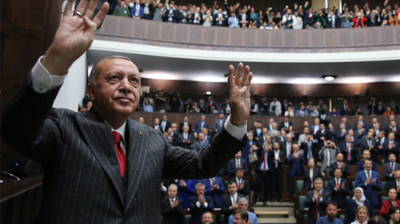 Erdogan takes the plaudits from AKP lawmakers in parliament on May 7. However, party members are said to be split over the decision to annul the Istanbul election defeat.
By bne IntelliNews May 7, 2019

Turkish President Recep Tayyip Erdogan has come under a hail of fire from the European Union and domestic opposition politicians following the May 6 announcement that the Istanbul election lost by his ruling Justice and Development Party (AKP) at the end of March is to be rerun due to “irregularities”. However, surprise is mounting at the lack of reaction from the US, with Bloomberg Opinion on May 8 publishing a piece entitled “Trump Can’t Let Erdogan Get Away With This”.

With Turkey’s EU accession process already practically frozen due to human rights concerns, the bloc’s foreign policy chief Federica Mogherini warned Ankara in a statement: "Ensuring a free, fair and transparent election process is essential to any democracy and is at the heart of the European Union's relations with Turkey." An EU spokesperson urged Turkey's High Election Board (YSK) to "without delay" explain the reasoning behind its controversial decision to accept Erdogan’s call for the annulment of the election result.

Stinging criticisms were directed Erdogan’s way throughout May 7—Germany's Foreign Minister Heiko Mass called the decision for a rerun "incomprehensible" and not transparent; leading MEP Guy Verhofstadt, the Belgian leader of the liberal group in the European parliament, said the Istanbul revote threatened to make continuing EU accession talks with Turkey "impossible" and commented that Turkey was "drifting towards dictatorship" and Paris called on Turkish authorities to show "respect for democratic principles, pluralism, fairness [and] transparency". Even some Turkish celebrities previously supportive of Erdogan turned against the president.

On the domestic front, the decision to hold a new poll on 23 June caused protests across Istanbul with hundreds of people in several districts banging pots and pans and shouting anti-government slogans.

Opposition candidate Ekrem Imamoglu, who won the mayoral election of the city of around 15mn by more than 13,000 votes (more than eight million votes were cast), described the move as "treacherous" and his Republican People’s Party (CHP) party colleagues accused election officials of giving in to pressure from Erdogan.

The Istanbul loss is seen as a humiliation for the president given that local elections across Turkey became a referendum on his 17 years at the helm of the country because of the parlous economic state the recession-hit nation finds itself in.

"System... overrules will of the people"
An AKP representative on the YSK, Recep Ozel, explained that the rerun was decided on because some electoral officials were not civil servants and some result papers were not signed. But CHP deputy chair Onursal Adiguzel said the cancellation of the result showed it was "illegal to win against the AK Party" and added on Twitter that the decision stemmed from "plain dictatorship". "This system that overrules the will of the people and disregards the law is neither democratic, nor legitimate," he wrote.

In a speech broadcast on social media, Imamoglu declared: "We will never compromise on our principles. This country is filled with 82 million patriots who will fight... until the last moment for democracy."

A supporters' group for Imamoglu made the case for restraint, saying: "Let's stand together, let's be calm... We will win, we will win again."

Speaking at a parliamentary meeting of the AKP, Erdogan risked inviting accusations of Orwellian doublespeak by claiming that there was "illegality" in the vote and a rerun was necessary as "an important step to strengthen our democracy".

"We see this decision as the best step that will strengthen our will to solve problems within the framework of democracy and law," he added.

Gul ‘planning new party’
But the decision to order a revote is said to have caused alienation and splits in the AKP. Abdullah Gul, Erdogan's predecessor and one of the party’s founding members, is by some accounts preparing to form a new party.

CHP leader Kemal Kilicdaroglu accused the YSK of betraying the trust of voters and caving in to AKP pressure, saying in parliament: “Since you want to renew the elections so badly, do so as much as you want. We will emerge victorious every time.”

Agreements with smaller opposition parties helped the CHP to victory in Istanbul, with the decision of the main pro-Kurdish party, the Peoples’ Democratic Party (HDP), not to put up a candidate and urge Kurds to vote for Imamoglu, seen as crucial.

One party that also featured in the opposition alliance in Istanbul and other localities during the local elections was ex-interior minister Meral Aksener’s nationalist Iyi (Good) Party. She said the ruling by the seven judges of the YSK that demanded a second election harked back to the era of Turkish military coups. “The YSK’s decision amounts to a which surpasses the days of the uniformed coups,” she said.

The HDP, the third biggest party in parliament, said it would repeat its policy in March of not contesting the Istanbul election, while two other smaller parties, the Islamist Saadet (Felicity) Party and the Democratic Left Party, indicated that they might also opt to not put up candidates and instead back Imamoglu.

The mayor of Istanbul oversees a budget estimated this year at Turkish lira (TRY) 24bn ($3.9bn), in a city which accounts for about a third of Turkey’s economic output.