End of an era of USSR dictators (or not?) 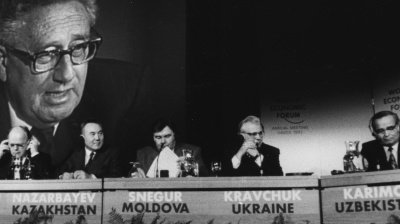 Henry Kissinger chairing a Davos panel session on “The New Partners” in 1992. The leaders seen from left to right are Stanislav Shushkevich of Belarus, Nursultan Nazarbayev, Mircea Snegur of Moldova, Leonid Kravchuk of Ukraine and Islam Karimov of Uzbekistan.
By Nizom Khodjayev in Astana March 22, 2019

Though he spent 27 of his 30 years in power leading an independent Kazakhstan as president, Nursultan Nazarbayev first emerged as the country’s leader when in June 1989 he became First Secretary of the Central Committee of the Communist Party of the then Kazakh Soviet Socialist Republic. Prior to that he had spent five years of the Soviet era as prime minister. So his resignation on March 19 is undoubtedly a meaningful milestone for historians: the last of the former Soviet dictators has exited the stage. But let’s not get ahead of ourselves for, certainly in the eyes of many ordinary Kazakhs, the Central Asian nation is still living through a “Soviet-groomed” era and Nazarbayev’s departure does not put an end to that.

Nazarbayev’s plan to continue ruling from behind the scenes aside, there’s a rather muddy picture when it comes to gauging the extent of genuine liberalisation in ex-Soviet states—and that’s especially the case in Central Asia. For every reform-driven Shavkat Mirziyoyev, who is intent on opening up Uzbekistan to foreign investment, there’s a Gurbanguly Berdimuhamedov, who, despite being a modest improvement on his predecessor, has mostly kept remote, tightly controlled Turkmenistan’s Iron Curtain-like policies alive.

Kazakh internet exploded with humour
In Kazakhstan, it’s not just hardened cynics who’ll tell you that 78-year-old Nazarbayev’s handing over of the helm will barely bring about any change. This was clearly apparent in the public reaction to the “Leader of the Nation’s” televised resignation announcement. The Kazakh internet exploded with humour and memes. The move, which essentially sees Nazarbayev loyalist and parliament upper house speaker Kassym-Jomat Tokayev, 65, take over as caretaker president, was dismissed as another facade, a demonstrative act that in reality would mean little to daily life.

There is of course plenty of talk over whether out of sight Nazarbayev is assiduously working on preparing the way to appoint his true successor, very likely using his resignation as an opportunity to place one of his family members in power before he passes away. If the late 2016 death of another ex-Soviet leader, the hard authoritarian Uzbek president Islam Karimov, was sudden and therefore opened up a window for drastic change, Nazarbayev’s carefully choreographed exit only makes sure everything will stay the way he and his camarilla have set in stone. Or so many Kazakhs believe.

The lack of dismay in Kazakh society at Nazarbayev’s ‘abdication’ is not difficult to understand, father of the nation or not. It is safe to say that the Nazarbayev era sometimes felt like little more than an attempt at closely mimicking the times under the country’s former Soviet master, Russia. From building an economy (still seen as a frontier market rather than an emerging market by most indexes) vastly over-reliant on exporting hydrocarbons, to stabilisation funds and the ruble-dependence of the Kazakh tenge, there is a plethora of examples that can be given.

Rude reverberations
The only real policy divergences took place after the rude reverberations of the 2014 oil price collapse and after the impact of western sanctions hitting Russia and, by extension, its economically interlinked former vassal states. Kazakhstan’s masters suddenly saw that the country needed to focus on diversifying its economy. Though correctly regarded as Central Asia’s economic powerhouse, Kazakhstan is somewhat nervous at the big opening up of neighbouring Uzbekistan to investors. The prospect of Tashkent rather than Astana (or Nursultan as it is now called in honour of Nazarbayev) becoming the region’s economic driver likely does not sit well with Kazakhstan’s elite clans.

Some investor-friendly reforms are now in play. They include attempts at simplifying regulations for subsoil users exploiting mineral reserves, the launch of the Astana International Financial Centre (AIFC) with its promises of tax exemptions and other perks and legal regime based on English common law, and an economic diversification drive with a focus on infrastructure and agriculture. Officials will, meanwhile, not lose sight of potential big investments they might attract under China’s intercontinental Belt and Road Initiative (BRI) for modern-day infrastructure-for-trade.

The Kazakh economy has managed to recover from the downturns it experienced in 2015 and 2016, largely thanks to the oil price recovery. Yet many ordinary Kazakhs have not seen their country’s restored financial health reflected in their quality of life. Nazarbayev’s career highlights as presented by the Kazakh authorities may be paraded before them, but they are typically too abstract to have any meaningful impact on their lives.

Vanity projects
Kazakhstan taking a non-permanent membership role at the UN Security Council or hosting a World’s Fair (even if it was in a futuristic building that mimics the Epcot Center in DisneyWorld) are seldom regarded as triumphs. They’re more likely to be dismissed as vanity projects for the out-of-touch ruling class.

Giving credit where credit’s due, let’s remember that Nazarbayev’s Kazakhstan has enjoyed less oppressive conditions than Karimov’s Uzbekistan went through. It’s also considerably freer than Turkmenistan is under Berdimuhamedov (though you might say he’s something of an improvement on predecessor Saparmurat Niyazov).

Where stability is concerned, the Kazakhs have seen nothing even approaching Kyrgyzstan’s two post-Soviet revolutions and political strife and Tajikistan’s civil war in the nineties. Some attribute this relative peace to Kazakhstan’s vast oil reserves; but that wouldn’t explain why gas-rich Turkmenistan and mineral-rich Uzbekistan took paths marred by child and forced labour, the strict regulation of the movement of their peoples both at home and abroad and ugly personality cults surrounding their leaders.

“Radiant Fatherland’s” one-party state
In other areas, however, Kazakhstan has not been too dissimilar to neighbouring ex-Soviet states. Crackdowns on dissent and freedom of speech have been common. The elimination of political opposition in favour of a one-party system has also been widely associated with long-time ruler Nazarbayev (who remains the leader of the ruling Nur Otan, or “Radiant Fatherland”, party as well as the chairman of the national security council).

The major low point of Nazarbayev’s career occurred when striking miners were gunned down in Zhanaozen in 2011—a blemish in Kazakh history that officials still find themselves inconvenienced by.

Since that tragedy, the crackdowns on demonstrators have been markedly less violent. The 2016 anti-land reform protests showed Nazarbayev’s willingness to backtrack on unpopular decisions and recent demands made by Kazakhs across the country for the raising of living standards ended with Nazarbayev ordering the drawdown of $3.6bn from the country’s rainy day fund.

The end of Nazarbayev’s presidency may well have ended the final chapter of Soviet-spawned rule. But as Nazarbayev still holds sway, it can hardly be said to have definitively ended his era. If a handpicked successor is decisively installed during the 2020 presidential election, we might then say such a thing. At that juncture, some analysts suggest, Kazakhstan might move from one-man-rule to something like rule-by-committee or cabal. But there is also the risk that a “Kazakh Putin” will emerge, that a new cult of personality will arise. And the ghostly echoes of the USSR would again be all too present.