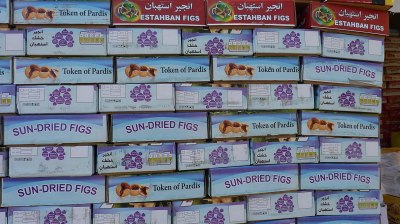 An Iranian fig with an EEU discount anybody?
By bne IntelliNews May 17, 2018

The Moscow-led Eurasian Economic Union (EEU) and Iran have signed an interim free trade agreement (FTA), TASS reported on May 17.

“The provisional agreement includes an initial list of goods, the import duties on which will be reduced or zeroed in mutual trade after the agreement comes into force. The agreement covers half of mutual trade," chairman of the Board of the Eurasian Economic Commission Tigran Sargsyan reportedly said at an economic forum held in Astana, Kazakhstan.

Since it was founded in 1979, the Islamic Republic of Iran has never managed to conclude an FTA with another country or economic bloc. In recent months, Tehran has repeatedly pushed Moscow to enable the sealing of the EEU deal. Iran sees access to Russia and the EEU as a major step to expanding its trading area to the north.

Trade between the EEU—the members of which are Russia, Kazakhstan, Kyrgyzstan, Armenia and Belarus—and Iran reached $2.7bn last year. The FTA list of goods for EEU countries includes meat and fat-and-oil products, certain types of confectionery, cosmetics and electronic and mechanical equipment. Iran on the other hand will enjoy tariff preferences on items including vegetables, fruits, dried fruits and building materials.

Several Iranian fast-moving consumer goods (FMCG) now present their information in Russian in addition to Persian, Arabic and English. They include items such as Iranian-made potato crisps and ice cream products.

Reportedly, a full agreement between the EEU and Iran may be signed in three years.

The US Senate on December 12 unanimously passed a resolution recognising the mass killing of Armenians in the Ottoman Empire a century ago as genocide. Armenian Prime Minister Nikol Pashinian ... more

Speculation is mounting that Turkey’s President Recep Tayyip Erdogan may call off a White House visit scheduled for next week. The reason given would probably be a protest against the recent ... more