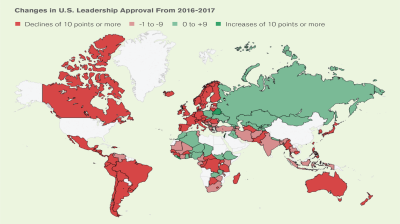 A year into Donald Trump’s presidency, the image of the US leadership has reached new lows across the world.
By bne IntelliNews January 18, 2018

This is despite an overall fall in approval of the US leadership to just 30% of respondents, down from 48% in 2016 when Trump’s predecessor Barack Obama was in power. The rating, based on surveys carried out in March-November 2016, is even four points before the previous low of 34% set by George W. Bush in the final year of his administration.

“Disapproval of US leadership increased almost as much as approval declined,” Gallup says. “The 43% median disapproval, up 15 points from the previous year, set a new record as well, not only for the US but for any other major global power that Gallup has asked about in the past decade.”

It reports that Germany has replaced the US as the top-rated global power in the world. “The US is now on nearly even footing with China (31%) and barely more popular than Russia (27%),” according to the pollster.

Still, the poll reveals that in numerous East European countries from Poland to Mongolia approval for Trump’s leadership increased last year compared to 2016, in most by a modest 1-9 percentage points.

Macedonia (up 15 pp) and Belarus (up 11pp) were among just four countries worldwide where US leadership approval increased 10 points or more, with the other two being Israel and Liberia. There's speculation that the approval for Trump in Macedonia could be linked to his plans - as yet unfulfilled - to build a wall to keep Mexican migrants out; Macedonia found itself on the frontline of the migrant crisis in 2015 when it was the main entry point for migrants seeking to travel from Greece across the Balkans to Germany and other northern European countries.

Approval of the US leadership also increased in Russia, despite the diplomatic standoff between the two countries, which intensified in 2017, and in most of Central Asia — Trump’s image in Kazakhstan could get a further boost this year as Kazakhstan struck deals with US companies worth a total of $7.5bn as the US president met with his Kazakhstani counterpart Nursultan Nazarbayev.

Aside from Macedonia, approval for the US leadership dropped in most Southeast European countries, with the sharpest declines recorded in Croatia (-20pp) Romania (-18pp), which traditionally is a strong backer of the US. The US has managed to alienate both liberals and conservatives in Romania; liberals broadly speaking are critical of his policies especially on immigration and climate change, while US diplomats' criticism of Romania's ruling Social Democratic Party (PSD) for its attempts to undermine the anti-corruption fight have upset some of the party's more conservative supporters.

In Africa, where the US leadership typically has a high approval rating, it dropped to 51%, even while rising in some countries. Still there is speculation the decline will deepen in 2018, given the US president’s recent description of African countries as “s***holes”.

Russia’s international reserves up $3.6bn in one week to $571bn

Russia’s gross international reserves were up by $3.6bn in a week to $571.2bn, at the same time as individuals are buying record amounts of foreign currency.

Hungary's automotive industry continues to rebound in June
3 hours ago
Russian GDP contracted by 4% y/y in the second quarter of 2022
3 hours ago
Poland’s CPI growth rate picks up just 0.1pp to 15.6% y/y in July
2 days ago
Romanian stock exchange reaches new record as BET-TR rises 5.7% ytd
3 days ago
Russia’s international reserves up $3.6bn in one week to $571bn
3 days ago