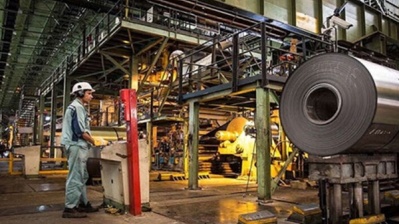 Iran has been building up domestic sectors such as its steel industry. / FNA.
By bne IntelIiNews August 26, 2020

During a virtual meeting with members of President Hassan Rouhani’s cabinet, he also called for an economy that “is not attached to foreign changes”, saying: “The plans for an economy must not be delayed due to sanctions or be dependent on the result of an election of another country.” The economy must be designed such that officials assume “sanctions will continue another 10 years”, he added.

In talking of how linking economic plans tied to the sanctions decisions of another country is a “strategic mistake”, Khamenei was clearly referring to how Rouhani’s economic growth strategy was wrecked by US President Donald Trump in May 2018 walking out of the nuclear deal, which Rouhani agreed to with six major powers in late 2015, and implementing crushing sanctions that plunged the Islamic Republic into an ongoing recession. Prior to the decision to sign the nuclear deal at a time when Barack Obama was the American president, hardliners in Iran had warned Rouhani that a future White House could not be trusted to respect the agreement, which lifted major international sanctions against Iran in return for limitations placed on the Iranian nuclear development programme.

In the meeting, Khamenei reminded Rouhani and his cabinet that they have one full year left in office—the next presidential election has been called for June, but Rouhani, a pragmatic-centrist politician, is not legally able to run again as he has served two consecutive terms—and told them to not let it go to waste.

He urged them to meet the promise of building 600,000 homes and reforming problems with the budget, the banking system and tax system.

Turning once more to the economy, Khamenei emphasised the need for the administration to focus on domestic production, calling it the “key” to resolving unemployment and inflation.

Given the huge restrictions placed on trade brought about by Trump’s sanctions, Iran has in the past two years been looking much more to China and Russia—countries not dependent on four-year election cycles—to establish long-term economic cooperation. However, if Trump is defeated by opponent Joe Biden in November, the Iranians would no doubt be looking once more to explore what economic development and growth they could achieve through newly relaxed relations with the West. To what extent they would bother to pursue such potential, given their bad experience with the US in recent years, is the only question.

Oleksandr Kamyshyn, CEO of Ukraine’s state-run railway operator JSC Ukrainian Railways, announced via Telegram that the company had paid coupons on its Eurobonds due in 2024 and 2026 on July 11. ... ... more