Russia's population is shrinking but not by much. The population in Ukraine has crashed to a level last seen in the 50s. / wiki
By Ben Aris in Berlin July 15, 2021

Russia is facing two decades of stagnation thanks to its shrinking population as a huge dent knocked into the demographic pyramid during the chaos of the 1990s arrives in the working population cadres. But if Russia’s demographics are a disaster, those of Ukraine are a catastrophe. After the collapse of the Soviet Union, at its lowest point Russia’s population fell to the same level as in 1985. By comparison Ukraine’s population has collapsed and has recorded a count last seen in 1959. It has given up about two thirds of all its population growth following WWII.

As bne IntelliNews reported in the “Putin’s babies” feature, Russia’s population was expected to collapse from 144mn in 2000 to as little as 77mn by 2020, as it was losing 750,000 people a year. But what happened was the Mother and Child reforms introduced by Russian President Vladimir Putin in 2006 stopped the rot and reversed the trend. Russia’s population enjoyed a decade of growth that only came to an end in 2018 as the demographic dent arrived in the working population, and the various crises in recent years have depressed birth rates and immigration again, although mortality rates continue to fall, while life expectancy is maintaining its rise.

Russia’s population has started to shrink again but the UN’s optimistic forecast for 2050 is for the population to shrink modestly from the current 148mn to 144mn, although the pessimistic prediction is for a more severe contraction to 125mn.

By contrast, Ukraine’s population has undergone uninterrupted collapse since 1991, falling from a peak then of 51.9mn to the current 41.9mn, according to the official Ukrstat numbers. And even that number is in doubt.

Ukraine’s population fell behind that of Poland for the first time as an electronic census revealed the number of citizens had dropped by some 5mn people to 37.289mn in 2020 since the last census in 2000.

But even ignoring these problems, the demographic curve shows that Ukraine’s population has been in an uninterrupted decline since 1991, and took an even sharper downward step in 2014 following the 2014 Revolution of Dignity.

Comparing the demographic pyramids of the two countries and the 1990s dent is clearly visible in both. But what has concerned demographers is a second dent has been put in both pyramids by the 2014 crisis that sent the whole region into a recession, from which it only started to recover in 2018. And in Ukraine’s case that crisis was made even worse by the Euromaidan revolution that led to Ukraine’s economy contracting by 17% year on year in the first quarter of 2015 – a shock almost as large as the collapse of the Soviet Union in 1991. 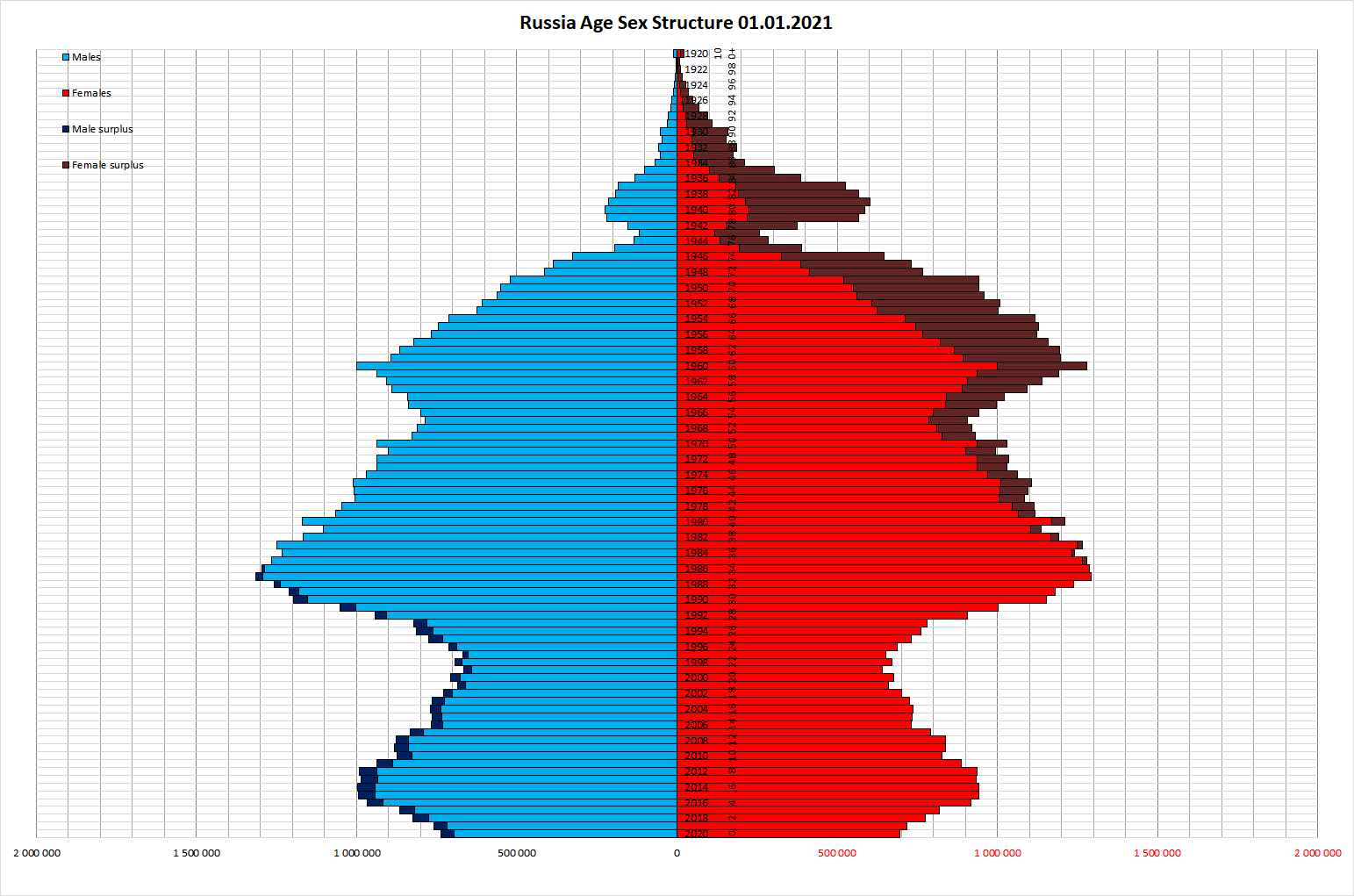 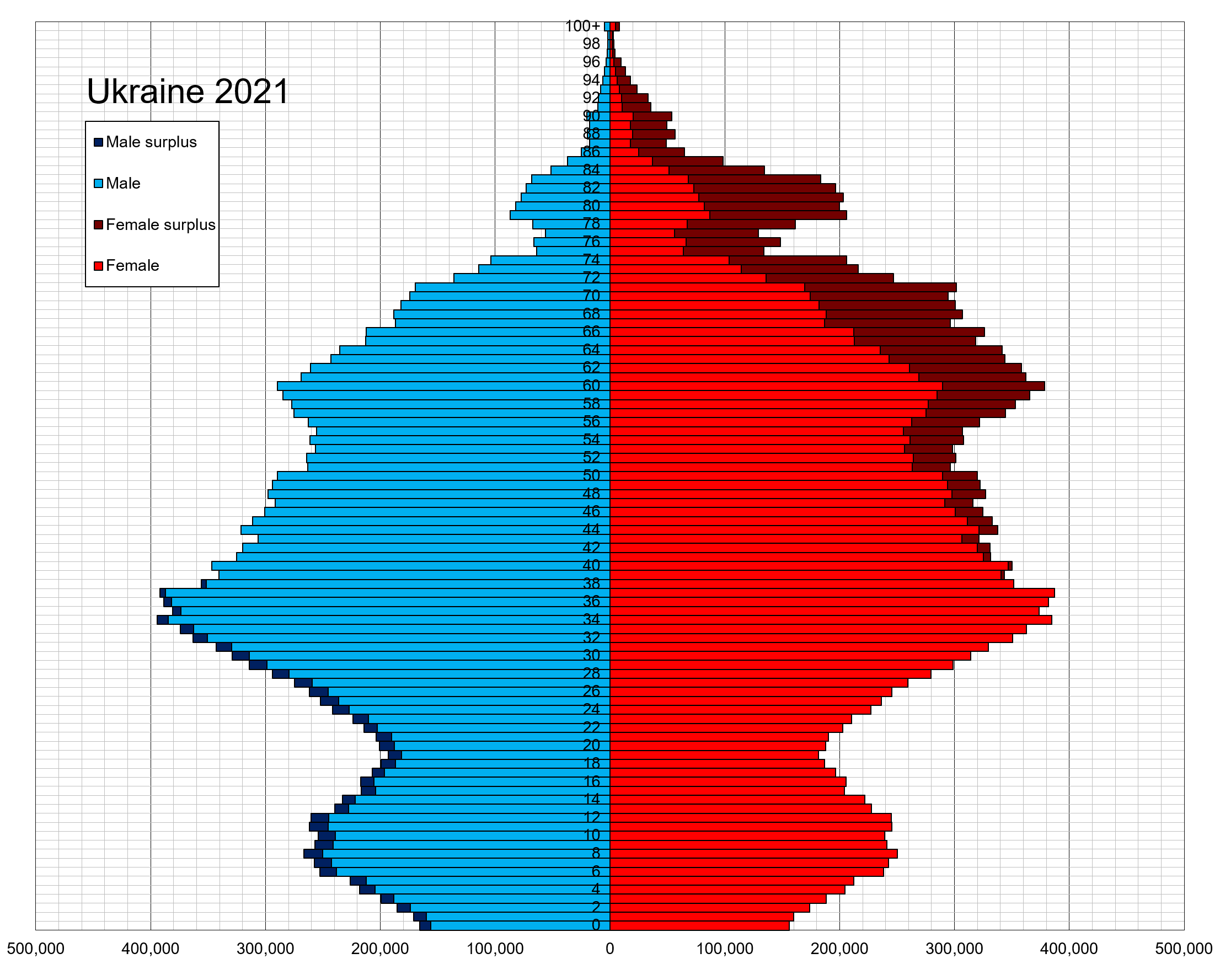 Ukraine’s population catastrophe has only been inflamed by the introduction of visa-free travel by the EU – by far the most popular reform achieved by former President Petro Poroshenko during his term in office. That has led to a massive labour outflow as a total of some 3mn Ukrainians moved to Poland and the other Central European countries to find work. Another 1 mn have also left the eastern Donbas region, fleeing the undeclared war raging there since 2014, most of them moving to Russia, which is now offering them accelerated citizenship.

Ukraine’s life expectancy has been running a few years ahead of Russia’s for almost all of the last three decades and both countries saw a sharp acceleration in life expectancy after the 2008 crisis, but Russia pulled ahead in 2015 and peaked with a life expectancy of 73.3 years in 2019 before last year’s double whammy of the coronavirus (COVID-19) pandemic and oil shock knocked the figure back again to 71.5 years.

Nevertheless, even with the setbacks Russians and Ukrainians are still living significantly longer than they ever have before in the history of either country.

Fertility rates have fallen steadily from pre-revolution rates of around three children per woman as they have done around the world thanks to the industrial revolution, which was particularly dramatic in Russia. Fertility was stable at around the replacement rate of two during the heyday of the Soviet Union but dropped way dramatically to around one in both countries following 1991.

Both countries saw fertility recover during the boom in the noughties, with Russia consistently running ahead of Ukraine. Recent peaks of 1.78 in Russia and 1.51 in Ukraine were recorded in 2015. But fertility has fallen since then in the last year, with Russia’s dropping back to just under 1.5 now and Ukraine’s sliding to 1.2.

In both Russia and Ukraine births were running comfortably ahead of deaths throughout the Soviet period, but in both the lines crossed in 1991 and remained well separated for the next two decades.

It was only in the last decade that births and deaths began to converge again, and in Russia’s case they actually met in 2012 at 13.3 deaths and births per 1,000 people. However, in both countries birth rates soon started dropping, while death rates rose again, and have jumped in 2020 as the number of excess deaths ran into the hundreds of thousands as a result of the coronacrisis.

Both countries are now facing significant economic problems due to the negative impact from their demographic crises. Russia is trying to attract some 500,000 immigrants a year after half of its 11.6mn immigrants left in 2020. But the ongoing coronacrisis and the steep devaluation of the ruble have made working in Russia a lot less attractive. Ukraine’s problem should be a little easier to solve. All it has to do is persuade the approximately 6mn émigrés that went to seek better paid work abroad to come home again.