Czech demonstration organisers make a business from it 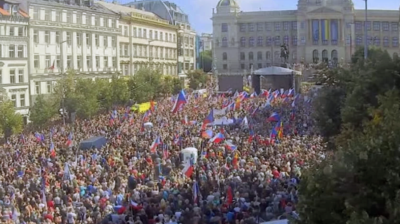 The protests in Prague's Wenceslas Square on September 4 drew a much larger than expected crowd of 70,000. / bne IntelliNews
By Albin Sybera September 11, 2022

The organisers of last weekend's big far-right rally in Prague’s city centre demanding the resignation of the Czech government and attacking Nato and EU are also active campaigners against COVID-19 vaccines and masks, follow Kremlin talking points, and appear to be running the protests as a private business, a Czech investigative journalist has revealed.

The protests in Prague's Wenceslas Square drew a much larger than expected crowd of 70,000, demonstrating the discontent over the worsening cost of living crisis, with inflation hitting 17.5% in July and soaring energy prices already beginning to translate into much higher domestic tariffs.

The organisers and far right and far left speakers at the "Czech Republic in First  Place" rally used this widespread discontent to rail against sanctions against Russia, accuse the government of helping Ukrainian refugees more than ordinary people, and to attack Nato and the EU.

Prime Minister Petr Fiala has been criticised for commenting that the leaders of the demonstration show "strongly pro-Russian stances". He was accused of failing to see that many protesters attended the rally out of genuine fears of not being able to afford the cost of heating this winter.

Though many of the demonstrators were ordinary people, the size of the rally did also highlight the strength of extremist opinion in the country. Last year’s parliamentary election saw 18% of votes cast for far right and fringe anti-establishment parties, though only the Freedom and Democracy party of political entrepreneur Tomio Okamura made it to the parliament, collecting 9.5% and 20 seats in the 200-member parliament. In addition the hardline pro-Russian Czech Communist Party just missed the 5% threshold to enter parliament.

The success of the fringe and extremist protest, and its exploitation of ordinary people's grievances, has worried political observers ahead of what is expected to be a "hot autumn", as the cost of living crisis worsens, and the country holds municipal and Senate elections later this month and presidential elections in January. The organisers of the protest have already called another protest on September 28, St Wenceslas Day, while trade unions will hold their own protest on October 8.

Since the protest, Czech journalists have been investigating Ladislav Vrabel, the main organiser of the protest, who depicts himself as a freedom fighter against the government and the EU, and warned against the “genocide of the unvaccinated” during the COVID-19 pandemic. He  also unsuccessfully run for parliament for the “Chcipl pes” platform, which lambasted COVID-19 restrictions and vaccinations.

Vrabel and fellow organiser Jiri Havel are both veterans of a febrile Czech anti-establishment conspiracy subculture, fertilised by numerous disinformation sites. Havel's Facebook profile contains a picture of red and blue pills with a phrase “your choice?”, a reference to the cult film The Matrix.

Now Vrabel and Havel have latched onto popular unrest with rising prices to campaign against sanctions on Moscow and help for the Ukrainian refugees.

An investigation by Czech investigative journalist Lukas Valasek has also revealed that Vrabel is bankrupt, with liabilities of CZK3mn (€120,000) and 27 registered enforced debt-collecting proceedings against him. His website for the protests calls for donations, which the organisers claim they use for the protests.

“Even CZK100 [EUR4] is a contribution with which you can take part in the plan Czech Republic First!”, reads the website calling the protest, and linking to Ladislav Vrabel’s and Havel’s Facebook profiles on the main page.

According to Vrabel’s answers to Valasek and his colleagues from Aktualne.cz, his Serbian wife Bojana Vurdelja collected more than CZK0.5mn (€20,000) from these donations, which Vrabel claims were used for organising the rally, adding that “further demonstrations and various other events” are to follow.

The organisers' disseminating of online disinformation and their portrayal as freedom fighters  is  “a lucrative way out of their dire financial situation”, Valasek told bne Intellinews.

Valasek said that since the pandemic there is an apparent trend of bankrupt and “unsuccessful people from the margins” manipulating “vulnerable groups of Czechs into believing they are saviours fighting on behalf of their freedom”.

These false narratives include depicting Ukrainian officials and its army as criminal and violent Nazis funded by Nato, and blaming the EU sanctions and EU climate policies for the energy crisis.

“Social networks algorithms play into the hands of these disinformators by spreading their lies to tens of thousands”, said Valasak, adding that targeted users also represent a pool from which Vrabel and others “lure money in the form of financial contributions”.

“It is an attractive way of money making, because if they were officially employed their salaries would be confiscated by bailiffs,” said Valasek.

Disinformation analyst Roman Maca has documented that pro-Russian activist Jiri Cernohorsky and Zarko Jovanovic, the Czech-Serbian presenter of the pro-Russian Raptor TV, are also either immersed in debts or in personal bankruptcy proceedings.

Besides unmanageable debts, all these men have also in common pro-Russian views, nationalist fervour for Czechia (or in case of Jovanovic, for Serbia) and a purported goal to protect their compatriots against the establishment at a time of crisis.

“Growing social tension of many citizens will further nourish the environment ripe for similar manipulators”, said Valasek. He added that it is essential for the Czech government “to better communicate with people and prevent them from seeking savours in merchants of fear”.

NGOs have in the past weeks been warning over the impact of rising costs of living on vulnerable parts of the population, with pensioners and low-income families struggling already. Some 700,000 Czechs (roughly 6.4% of the population) remain trapped in endless enforcement procedures, many of them facing debts impossible to pay off during their lifetimes.

Opposition parties accuse the government of doing too little too late to face the crisis, and they held a vote of no-confidence on September 1.

A recent survey conducted for the Czech Radio shows that 55% of Czechs distrust  Fiala's cabinet, and some 70% are dissatisified with the way cabinet handles the energy crisis. Most of the 70% are people who did not vote for parties represented in Fiala's cabinet. People aged 45-59 are most freqently among those dissatisfied.