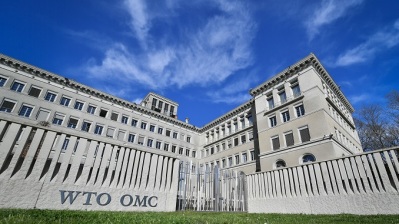 Washington supported Moscow in a WTO trade dispute with Ukraine that could upset the global trade regime / wiki
By Iana Dreyer of Borderlex in Paris April 9, 2019

Russia and the United States rarely agree on anything in global politics. But Washington was the only World Trade Organization (WTO) member that supported Moscow in a highly politicised legal dispute at the organisation’s dispute settlement body that many have a systemic impact on the whole international trading system.

The WTO’s panellists were asked to judge on restrictions Russia imposed on transit of goods on their way to Kazakhstan and Kyrgyzstan following the 2014 Ukrainian crisis. The case has become a proxy for a larger-than-life trade dispute that is making its way through the machinery in Geneva: there are similar cases brought by thirteen countries against US steel tariffs introduced last year on national security grounds. The Russian decision may directly affect the US trade regime as well.

After spending some 17 years trying to get into the WTO, following its accession in August 2012 there was a brief window when the Kremlin began to open its markets up under WTO rules, only to slam that window shut again in 2014 following the annexation of Crimea. Russia has de facto ignored the WTO rules ever since.

Ukraine complained against a 2014 trade rule Russia adopted after it enacted import bans on food products originating from Western countries: goods banned in Russia but destined to other members of the Eurasian Economic Union (EEU) would need to be brought to one single check-point at the Belarus-Russian border. Kyiv also complained against a 2016 rule that required all transit to Kyrgyzstan and Kazakhstan from Ukraine to go through Belarus.

Balanced ruling – or nobody happy

“Had the measures been taken in normal times, i.e. had they not been taken in time of an “emergency in international relations” (…), Ukraine would have a prima facie case” that they would be inconsistent with WTO rules establishing freedom of transit, the WTO’s panellists stated on Friday.

But in the panel’s view, there was no denying that Russia was acting in such an emergency situation, and was hence allowed to invoke Article XXI of the General Agreement on Tariffs and Trade, which allows WTO members to introduce non-compliant trade restrictions on to look after their “essential security interests”.

The GATT’s famous Article XXI allows members to take any measure they see fit on national security grounds, but does introduce some caveats, such as the requirement that there be an emergency situation, the need to enforce UN resolutions, or the measure be meant to prevent arms trade or trade in “fissionable” – i.e. nuclear - materials.

The ruling is making nobody happy.

The Ukrainian side believes that the panel didn’t act even-handedly, letting Russia getting away with insufficient evidence that its security interests were at stake – as well as with a WTO-illegal measure. Ukraine had argued that Russia was basically reacting to Ukraine’s signing on to a Deep and Comprehensive Free Trade Agreement (DCFTA) with the EU, but there was no objective security reason to impose those transit bans.

Russia – supported by the US which had intervened as third party in the case – had argued that the WTO panel had no jurisdiction whatsoever in the case. Moscow argued that Article XXI of the GATT leaves total discretion to WTO members to decide on their course of action. Paragraph b) of this article says that the GATT’s rules are not in any way construed “to prevent any contracting party from taking any action which it considers necessary for the protection of its essential security interests”. Moscow sees the “which it considers necessary” language as meaning that no WTO panel may look at the issue altogether. In support of Moscow, the US wrote to the panellists arguing that invoking national security was “self-judging” and “non-justiciable”.

The three panellists flatly rejected the claim. “There is no basis for treating the invocation of Article XXI […] as an incantation that shields a challenged measure from all scrutiny”, the report reads.

“It is a balanced decision”, reckons Stéphanie Noël, a trade lawyer in Geneva. “WTO Members are accorded a rather high level of deference in deciding what their essential security interests are, and how to defend them. At the same time, the obligation of good faith applies to both the definition of those interests, and to their connection with the measure at issue. Both must be found “plausible”.

The case could send shockwaves through the WTO system over time.

Washington’s steel tariffs introduced last year are based on Section 232 of the 1962 Trade Expansion Act, which empowers the US president to impose unilateral trade restrictions for national security reasons. The measures affected close US allies, including NATO and EU members as well as Japan. The US exempted some countries from the tariffs, imposing only duty-free quotas in return for trade concessions. US friends such as Korea, Argentina and Brazil played along. The others refused and saw tariffs slapped on their metals exports.

The US administration is currently considering applying tariffs on imports of autos on similar national security grounds.

The EU, Canada, Turkey, Mexico and others are suing the US in the WTO over the steel duties, arguing that the US is using the national security argument as a disguised protectionist measure and trying to exempt itself from WTO rules altogether.

To several analysts, the ruling is bad news for Washington. US president Donald Trump has on occasion expressed the desire to leave the WTO. The US Trade Representative, Robert Lighthizer, a long-standing WTO critic, sees the Geneva’ trade dispute settlement mechanism as impinging too much on national sovereignty.

The US is currently blocking the appointment of members of the WTO’s Appellate Body whose terms have expired. By end 2019, the appellate function in Geneva could simply wane. This would weaken a system of impartial and peaceful settlement of trade disputes valued by a large group of countries, who fear crude power politics could enter the game in international trade relations and signal a return to a less benign international order. In short: Washington has thrown the WTO into an existential crisis.

The panellists clearly had the US cases in mind. The 137-page panel report delves into the history of the security exception when it was under negotiation in the 1940s and led to Article XXI of the GATT. The report shows that the US administration at the time was split over the clauses’ merits. The defence community in the US wanted the security exception to be absolute and the GATT dispute settlement mechanism not to be allowed to adjudicate any cases related to security. The US diplomatic community for its part argued that such a carve-out would mean the whole multilateral system would not be able to function. The latter won the argument at the time….

It’s not clear yet how the current disputes on the US steel measures will pan out. If the panellists choose to refer to the Russia-Ukraine case – nothing requires them to do so - “the panels will likely require the US to show, objectively, the existence of an “emergency in international relations”, explains Robert McDougall, the director of Cadence Global, an international trade consultancy.

“If this panel report is followed, then the US will have a hard time to show instability - war is out of the question. If they manage to do that then it will be an easy ride for the US”, reckons Petros Mavroidis, a law professor at Columbia University.

Russia will likely live with the panel decision. It is not clear yet if Ukraine will appeal the case – a decision is expected after the presidential elections in the coming weeks Kyiv. For all its frustrations about blocked exports to Central Asia: it will need to consider its broader relationships with Russia, as well as whether it wants to rock the boat with the WTO and potentially provoke the United States.

This article first appeared in the premium section of Borderlex, a publication that specialises on international trade issues

ASH: The West is short-changing Ukraine
13 hours ago
RIDDLE: If they fear us they respect us
13 hours ago
COMMENT: Can Russia pivot its European gas sales to Asia?
3 days ago
Perspectives | Beijing and Moscow clash over Kazakhstan’s oil
3 days ago
COMMENT: Emerging European tightening cycle coming to an end
7 days ago