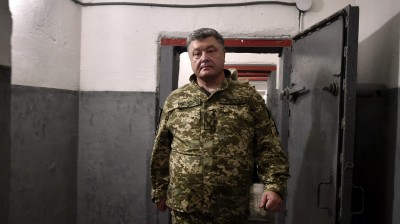 Ukrainian president Petro Poroshenko is trailing in the presidential election polls behind rival Yulia Tymoshenko by 10 points
By Nikita Stepanov in Moscow November 27, 2018

As traditionally happens at the beginning of winter, the temperature drops but passions rise in Ukrainian politics. In a political system with a long break between the Western Christmas on December 25 through to the Orthodox New Year on January 14 and then more holidays in May stretching long into the summer as Rada deputies head off glamorous international holidays (President Petro Poroshenko went to the Maldives last year). Ukraine packs a lot of action into the relatively few working months in the winter season.

What really happened in the Azov Sea on Sunday is anybody’s guess. In Ukraine, anything can happen – this year we saw a “murdered” journalist literally come back to life a few hours later. Political incumbents across the region benefit from geopolitical gyrations as focus is distracted from domestic issues such as corruption and low economic growth, so headline grabbing scandals are a norm.

The immediate beneficiary of the situation following the ramming of a Ukrainian navy tug by a Russian cruiser at the weekend that has just lead to the imposition of martial law in Ukraine, appears to be Ukrainian president Petro Poroshenko. His challenger in the upcoming presidential election Yulia Tymoshenko has come out of the election starting blocks at a lightning fast pace as anyone who has seen her face on billboards across the country can attest. Her early campaigning on issues like domestic gas prices has seemingly paid off, with Poroshenko’s popularity ratings dipping to close to the margin of error.

Poroshenko’s election slogan of “Army, Language, Faith” points to a candidate that will be more comfortable on geopolitical issues than domestic troubles. The adoption of martial law (in Ukrainian “a war status”) might focus minds on security affairs. And while the incumbent claims that this martial law will not delay elections Ukrainian presidential election candidate Ihor Shevchenko notes that the events at sea on November 25 were especially minor compared to events in 2014-2015 and the annexation of Crimea by Russia, so any further action may lead the president to request martial law to be extended further. IF that happens then the presidential elections slated for March 31, 2019, would have to be cancelled or at least delayed. Poroshenko’s opponent clearly has momentum on her side but momentum cannot be maintained forever.

From a business perspective, steel mills belonging to Ukraine’s richest man Rinat Akhmetov export more than half of their output from Ukraine’s Azov Sea ports, especially Mariupol, which is bottled up inside the Sea of Azov. His Metinvest has redirected some exports to Black Sea ports but this imposes additional logistical costs.

Russia is no stranger to tweeted condemnations from Western politicians these days and the episode in the Azov Sea seems too minor to alter the sanctions landscape. The effect of another hostage drama or martial law may, however, be a game changer for Ukraine’s unpopular president.

Nikita Stepanov is a former investment banker in Kyiv and independent Ukrainian analyst.

President Alexander Lukashenko’s Belarus has long been a success story in the post-Soviet world, but now he is in trouble facing country-wide protests. He will probably win the August elections, but how long can he hang on to power?