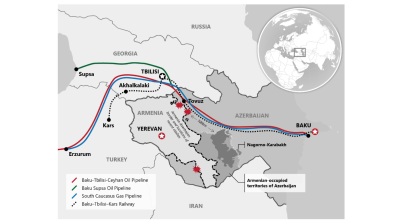 The fresh flare up of fighting on the Armenian-Azerbaijani border threatens both the region’s and Europe’s energy security / wiki
By James Dey founder and co-chair of Friends of Azerbaijan in South Africa July 29, 2020

Less than a year ago I took a drive from Tbilisi to Baku, stopping in Azerbaijan’s Tovuz region, the ancestral home of a close friend. I have taken this journey annually for almost a decade, enjoying idyllic landscapes of rolling hills dotting the countryside.

The recent news of Tovuz becoming the epicentre of a new conflict with Armenia stunned me as a painful reminder of how fragile South Caucasus remains following the never-resolved Nagoro-Karabakh war. However, the original territorial dispute was about 100km south and frozen by 1994’s cease-fire agreement. There was something else on this land that a military aggressor sought.

Far from the capital of Baku and Nagorno-Karabakh, hidden amongst the villages and wineries of Tovuz is a highly strategic Baku–Tbilisi–Ceyhan (BTC) pipeline carrying oil from Baku to Turkey via Georgia. A key part of plot in the 1999 Bond film “The World is Not Enough”, it was depicted as the “King Pipeline” – a thinly-veiled reference to the real-world project completed soon after in 2006.

BTC is the only land route by, which oil can be transported from the Caucasus to the Mediterranean, and the parallel gas pipeline ensures European energy security with the potential to supply up to 10% of its gas imports.

China further confirmed Tovuz’s strategic importance in 2017, constructing key link within its “Belt and Road” initiative via the Baku-Tbilisi-Kars (BTK) railway. Providing the shortest rail connection between Europe and Asia, the new route is expected to carry 6.5mn tons of cargo annually, a significant share of Asia-Europe freight traffic.

Armenia’s occupation of Nagorno-Karabakh may have been a strategic move to block Azerbaijan’s transport access to Turkey and the European market. Armenia sought to not only deprive its enemy of land, but also of geopolitical opportunities and economic prosperity. It is a war that I’ve always baffled to understand, how something like Nagorno-Karabakh can exist in the 21 century, with blatant occupation of a country’s territory and five UN resolutions demanding withdrawal of Armenian forces, yet not a single one implemented.

The latest escalation is particularly alarming, as it takes the conflict’s scope outside Nagorno-Karabakh and into the never-disputed Tovuz.

Absent from Armenia’s military plans in the 1990s, Tovuz’s newly-gained global importance may have increased Yerevan’s appetite. Potential knock-on effects would be devastating not just for Azerbaijan, but for regional and global stakeholders. Georgia would lose revenues from Azeri hydrocarbon and freight trans-shipments, China would see a major link in the Belt and Road project severed, and Europe could lose a key source of gas supply.

It is common to shore up external conflicts in times of domestic discontent to divert attention from internal issues. However, belligerence on the border with Azerbaijan will alienate Armenia from participation in regional projects and foreign investment opportunities. Even on the military front, Armenia’s allies do not wish to terminate positive relations with Azerbaijan, and Russia, its principal partner, assumed a cautious position to “act as a mediator” and avoid expressing unilateral support for Yerevan.

Yet, given potential global implications of a conflict in Tovuz, the international community needs to stop relying on Russia for resolution and demonstrate decisive action in halting the fighting. This is yet another an opportunity for EU leaders, emboldened by their recent success in agreeing a massive collective response to Covid-19, to flex the union’s foreign policy muscle and help solve a crisis in its neighbourhood. It is time for Armenia’s global trade partners to apply pressure to put an end to belligerent activities. The region does not need another war, nor does the world need conflict in this challenging time.

James Dey is the founder and co-chair of Friends of Azerbaijan in South Africa and the Azerbaijan-South Africa Chamber of Commerce.

Decoupling from West to leave Russia as China’s junior partner
1 day ago
MACRO ADVISORY: Ruble at 5-year high, how strong can it get?
5 days ago
COMMENT: Sanctions are working, but the West risks isolating Russian reformers instead of galvanising them
9 days ago
NEMETHY: Where are US markets? Where are they heading?
9 days ago
COMMENT: Constanta concerns
16 days ago