Given the wave of sanctions, counter-sanctions and expected sanctions, the view on the Russian stock market is even more blurred than usual. Both the near-term outlook for 2014-15 and long-term projections depend on how the crisis in and around Ukraine will evolve. What can said without doubt is that the fallout from the crisis is hurting Russia’s economy and financial markets.

Since February 28, the day when the conflict started escalating, the Russian stock market (RTS) lost 6% vis-à-vis a 9% gain of its emerging market (EM) peers. Over the same period, the Central Bank of Russia’s (CBR) policy rate was raised three times by 2½ percentage points in total, two-year domestic sovereign yields increased by almost 240 basis points and the ruble – after losing 12% against the dollar since September 2013 – dropped another 6%, reaching all-time lows in mid-September.

Actual data, both from the macro economy and from the corporate sector, are still not indicating a major crisis. However, the impact of the sanctions now in place has not fully materialized, and the threat of a further escalation with another round of sanctions cannot be dismissed given the fact that the key issues in the conflict have still not been resolved. While Russian stocks – which were already inexpensive at the outset of the crisis – got even cheaper relative to peers and the market’s own history, a lot of courage would be needed to make a bullish case at this point.

Sluggish 2014 growth, uncertain outlook for 2015 and beyond

2014 growth forecasts for the Russian economy have dropped from 2.4% at the beginning of the year to currently 0.25%. Most of the correction happened in the second quarter, after the absorption of Crimea. The current 2014 consensus implies that seasonally adjusted quarterly growth will turn negative in the second half of the year. In recent months, economic indicators partly surprised on the upside, but the trend is clearly heading south. 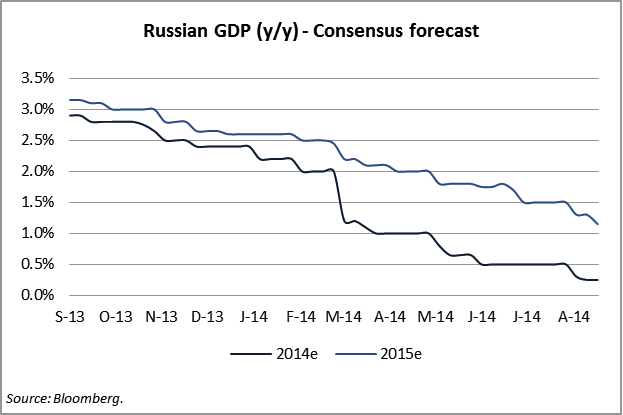 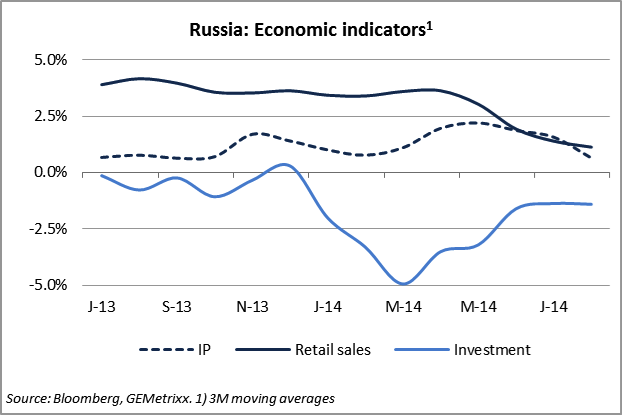 The consensus forecast for 2015 is still above 1%, but will likely come down further in response to the recent round of sanctions, which again tighten the access to external financing for state-owned banks and for the energy sector, as well as access to technology for the latter. Ruble weakness and the newly introduced import restrictions together with government support to spur import substitution will alleviate the downward pressure, but the adjustment process will take time and is unlikely to fully compensate for the shortfall in private demand.

Muted impact on the corporate sector – so far

The second-quarter earnings season – like the previous one – did not show any signs of an aggregate earnings collapse. Overall, positive earnings surprises outnumbered negative ones. Earnings forecasts have been cut since the middle of the year, and for the full-year consensus earnings are expected to shrink by 10% on year, but revisions have been moderate and less pronounced than, for example, in CEE3 (Poland, Hungary and Czech Republic), where earnings expectations have been trending lower since the first quarter. 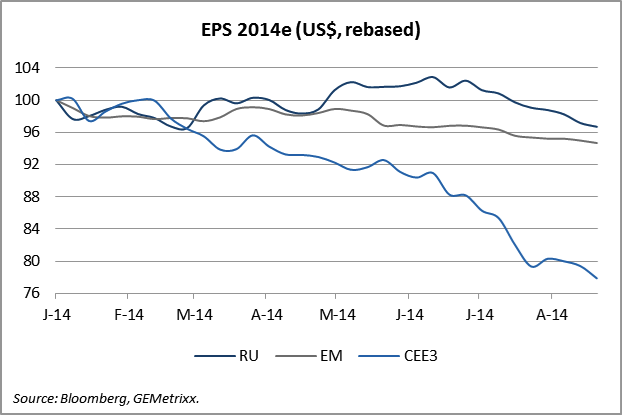 That said, pressure on margins among Russian companies has increased. After their stabilisation or even slight improvement last year, since the first quarter of 2014 both operating and net margins have resumed their downward trend. Somewhat surprisingly, the anticipated positive impact from the weakening ruble has failed to materialize so far on an aggregate level. 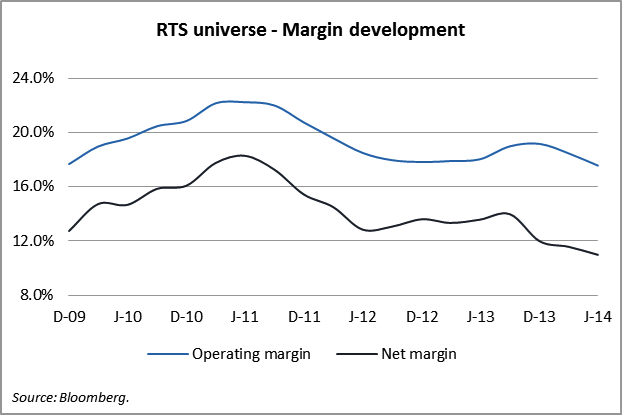 Russian stocks, on average, are presently trading below 5x forward earnings, implying discounts of 60% and 70% respectively versus the wider emerging market universe and CEE peers. Relative to a year ago, the valuation gap has widened by about 10 percentage points. Obviously, this de-rating is the result of the Ukraine conflict and the related deterioration of Russia’s economic outlook, which is mostly (but not only) related to the West’s sanctions. 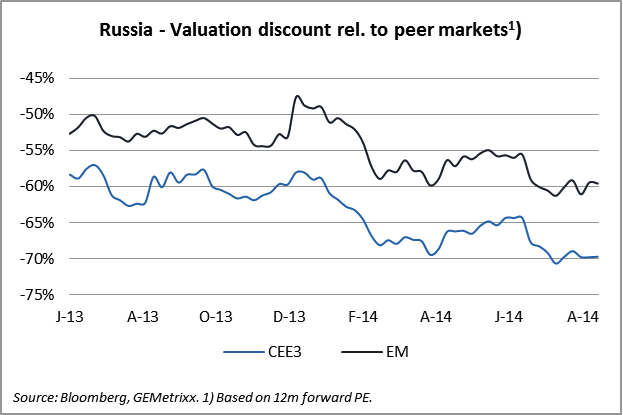 It is tempting to assume that any signs of de-escalation will soon lift valuations back to pre-crisis discounts, particularly taking into account that the market also looks cheap relative to oil. While a relief-rally is always possible, for various reasons I do not expect a sustained rerating in the near future.

Firstly, despite the recent cease-fire there are no signs of the underlying conflict ending soon. Even if a compromise on the status of the East Ukrainian provinces were to be found, neither Russia nor Ukraine can afford to back down on Crimea. Many observers expect a ‘frozen’ conflict, which implies that sanctions will stay in place for an extended period.

Secondly, sanctions rarely tend to be reversed so shortly after being introduced. Hopes that the EU would already in November take back recently introduced sanctions seem unreasonably optimistic. Moreover, even when sanctions will be lifted eventually, there is a risk of continued ‘self-sanctioning’ by Western investors and companies. Previous cases of sanctions showed that “the private sector is often understandably unwilling to engage with a target state”, as a recent article in Foreign Affairs on the stickiness of sanctions noted.

Thirdly, and most importantly, the current conflict will have long-term implications regardless of whether, when and how the crisis will be resolved. It is difficult to imagine that the political and economic relations between Russia and its western counterparties will return to pre-crisis normalcy within the next few years. More likely, the Kremlin is seeing the crisis as vindication of it protectionist and etatist instincts, which have been evident for some time.

Russia’s new growth model – as Dmitri Trenin recently wrote –“will not be autarkic, but neither will it rely too much on exploiting the fruits of globalization. Recent sanctions against it have taught Moscow that these fruits can suddenly grow sour.” It needs still to be seen what role international portfolio investors will be assumed to play in this model – and what role the West will them allow to play.